I feel like I’m always craving cinnamon rolls. Usually late at night, about thirty minutes before bed time, I convince myself I can just “whip up a batch” in a few minutes. Of course, much to my dismay, most recipes from scratch require hours of rising time, or I don’t have any cans of sheet dough handy. Well folks, I’ve done it. I’ve figured out how to master cinnamon rolls in about thirty minutes. So long late night cravings, I’m coming for you!

This dough requires NO yeast and yet is just as so any fluffy as a dough that had hours to rise. The secret: baking powder and buttermilk. Their combination makes for a perfect acidic combination that makes the dough buttery soft. Of course, I don’t always have buttermilk on hand – and no worries if you don’t either. Just curdle some regular milk with a tablespoon of lemon juice to achieve a similar effect.

Roll the dough out nice and thin. If you’re making just regular ol’ cinnamon rolls, now is when you’d add the sugars and butter to the center of the rolls. This time, however, I added bacon down the middle instead!

I making mine in a cast iron skillet on the stove top for this week’s challenge of “one pot.” Thus far, I’ve only needed a bowl to stir together the dough ingredients.

When the butter and sugars are nice and bubbly, add the slices of rolled dough, bacon side down into the caramelized sugars. When the tops of the bacon has crisped up, transfer the cast iron skillet to the preheated oven to finish cooking.

Once I removed the rolls from the oven, I let them cool for a few minutes in the cast iron skillet before flipping them out onto a plate then letting all the ooey-gooey, cinnamon-y caramel-y goodness drizzle out on top. For an added touch for classic cinnamon rolls, I made a simple cream cheese frosting too.

They are pillows of bacon-y deliciousness, topped with caramelized cinnamon sugar – the perfect excuse to eat dessert for breakfast (or breakfast for dessert!). 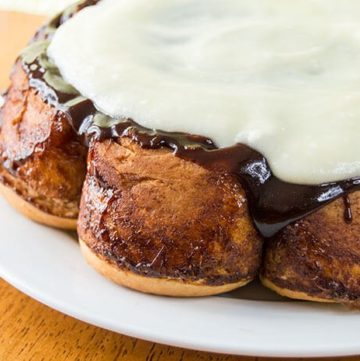 The Starving Chef
This dough requires NO yeast and yet is just as so any fluffy as a dough that had hours to rise. The secret: baking powder and buttermilk.
Print Recipe Pin Recipe
Prep Time 10 mins
Cook Time 15 mins
Total Time 25 mins
Course Breakfast, Dessert
Cuisine American, Bread, Breakfast
Servings 10

Keyword bacon, cinnamon, dough
Tried this recipe?Let us know how it was!