Every so often, when I hit up Jimmy John’s for lunch, I’ll also grab a few loaves of their day old bread – which is usually sold for a discounted price. It’s a little secret I learned about while on a college budget (and back then it was only 25 cents a loaf!). I recently picked up two loaves for a buck and decided to see what else I could make with them – Jimmy John’s bread is delicious after all.

I landed on the idea of making an easy bread pudding, and with some browning bananas on my counter top, I knew banana bread pudding was a must. I recommend using bananas that are stilla tad firm, maybe a day past their primo eating time, for optimal sweetness and texture.

The best way to make bread pudding nice and moist is to let the bread soak in the cinnamon milk and eggs mixture for at least 10 minutes (and I’ve seen recipes that say to let it soak overnight!) but be sure to add the bananas last, so they don’t get too soggy and brown prior to cooking.

Banana bread pudding can be served like french toast for breakfast or as a sweet dessert. Regardless of when you eat it, serve it topped with a warm and creamy milk glaze.

My boyfriend and I ate through an entire pan of this bread pudding in a single weekend – it was literally SO GOOD, all thanks to the day old Jimmy John’s bread! 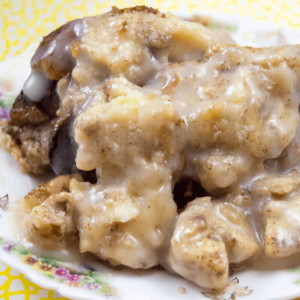 Keyword banana, bread, breakfast
Tried this recipe?Let us know how it was!