“You’re right. The wildlings are no different from us. A little rougher, maybe. But they’re made of meat and bone. I know how to track ’em and I know how to kill ’em. It’s not the wildlings giving me sleepless nights. You’ve never been north of the Wall, so don’t tell me what’s out there.”

It’s “Game of Thrones” week here in the Starving Chef’s kitchen. I’ve delved deep into Westeros for inspiration – and resurfaced north of the Wall. In case you aren’t caught up on all of Game of Thrones – be warned there are mild spoilers in this post!

In the books, Benjen Stark is referred to as Coldhands and rides a giant elk. However in the show, he rides in on a dark horse. When the elk dies in Dance with Dragons, it is blessed by Coldhands and then cooked and eaten by Bran and Meera. I imagine if they weren’t in such dire circumstances – they may have prepared the elk as meatballs for traveling efficiency.

Elk meat is fairly easy to find in any speciality meats grocery store. Thick and gamey, elk is comparable to venison but with more robust flavors that are best defined by shallot and mustard. Bread crumbs, hoisin and eggs are used to help hold the meat together.

Once the meat is mixed efficiently, roll it into balls small enough to be portable but big enough to be filling. If you were a Wildling or of the Night Watch, you’d want the meatballs to easily fit in your pack but not take up too much space.

Onions, shallots and garlic are frequently found on both sides of the Wall and are referenced to in dishes throughout the series.

Shallots and onions, when slow roasted create a heavenly sweet and savory flavor that goes perfectly in gravies and alongside gamey meat.

In one of the first chapters of A Game of Thrones Benjen and Jon Snow share a meal of onions and gravy.

Something I think Benjen would love to indulge in again if he weren’t, you know, Coldhands.

Despite the blowing cold and howling wind, elk meatballs are filling enough to warm you through (and delicious enough you won’t want to stop eating them).

“You’re no ranger. Here, a man gets what he earns, when he earns it.”

*This recipe is a combination and modification of recipes found in the Unofficial Game of Thrones Cookbook. 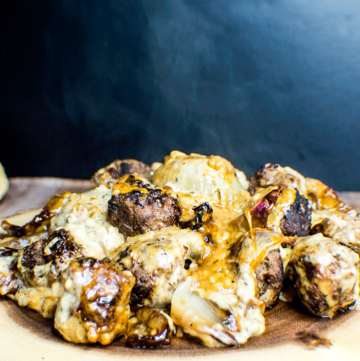 Keyword elk, Game of Thrones, meatballs
Tried this recipe?Let us know how it was!