You’d be hard pressed to find a Bobcat that hasn’t eaten a Big Mamma burrito at least once during their stay at the most amazing university in the entire world. If you’ve ever merely taken a stroll down the red bricked Court Street, you would have walked past one of the greatest gems in all of Southern Ohio: Big Mamma’s Burritos.

A late night burrito shop, Big Mamma’s is by far one of the most popular foods at OU, followed closely by Wings Over Athens, Goodfellas, Burrito Buggy, and Insomnia Cookie. The star of the menu, the Chipotle Ranch Mamma, is consumed nightly by hundreds of drunk and fun loving students.

I’d have to say one of the best parts of being able to recreate this burrito as an alumni of Ohio University, in the quiet of my own home, is that I won’t wake up with half of the burrito strewn across the entire property with the other half partially consumed and tucked under my pillow – as I may or may not have experienced on several occasions during my time as a Bobcat. We’ll just leave it at that.

The key to this recipe, I think, is not so much of what you stuff inside your burrito, as long as you can nail the very distinctive chipotle ranch sauce that Big Mamma’s loves to cover their burritos in.

I chose to recreate my favorite version of the Chipotle Ranch Mamma with shredded chicken, but beef, pork, or chorizo are all authentic options. It’s also important to get the fresh romaine lettuce into the wrap – chop it yourself and don’t use shredded lettuce.

I boiled the chicken in a chicken broth for an hour and a half prior to shredding it.

Next I combined two tablespoons, filled with chipotle peppers, into 1/4 cup of the ranch then let it chill until I was ready to wrap up my burrito.

Make sure you pile the filling high to really recreate that overstuffed burrito that Big Mamma’s rolls so well.

I even rolled mine up in foil, not only to help seal the burrito together, but also so I didn’t have to clean any plates. Hooray post-grad life!

It was nice to be able to eat this burrito, sober, and reminisce about my four years in Athens – now over two years behind me. Where does the time go!? 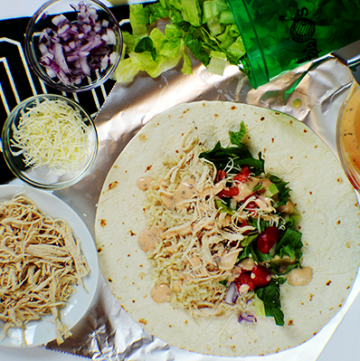 Keyword burrito, chicken, ranch, tortilla
Tried this recipe?Let us know how it was!