Risotto is a dish that sounds fancy, but is actually pretty simple when it comes down to technique. As someone who often messes up steamed rice (…I know), risotto is an easy but impressive dish that can be dressed up or down, depending on your mood.

I took advantage of some NYE seafood sales and snagged some shredded lobster tail for crazy cheap – but this dish can be made with shrimp too, if lobster isn’t quite your style.

I also had some cocktail shrimp leftover from our New Year’s party, it got tossed into the risotto as well. Because both my lobster tail and shrimp were precooked, I added them last, just long enough to be heated through. Risotto is traditionally made with arborio rice, which is a short grain rice and therefore cooks faster than long grain rice, especially with the cooking technique used to cook the rice.

Start things off with some browned butter – literally all you need to do is brown the butter in a skillet. The butter will get frothy and shortly after, the froth will disappear, leaving a nice, brown butter. It’s important not to have the heat too high and burn the butter, so keep a watchful eye!

Toss in the shallots and once they are nice and browned, add the peppers and garlic and saute until the garlic is fragrant and just beginning to brown.

Add the wine to the skillet and simmer until most of the liquid has evaporated.

Then stir in the rice so it’s covered with the butter/wine liquids. Add a half cup of the seafood stock.

Basically the technique to cooking the rice in risotto is to add stock, stir until the rice has absorbed the stock, then repeat until the rice is tender and cooked. You’ll know the rice is ready for another cup of stock when you can drag the spoon through the rice and it leaves a ‘trail.’

So add a half cup of seafood stock…

..and stir until the liquid is gone! You’ll need to repeat the steps a few times to get the perfect risotto, but trust me, the effort is worth it.

As I said in the beginning, my shrimp and lobster came precooked. While using fresh ingredients is definitely encouraged, I take no shame in using what I can find and afford on a Starving Chef budget!

I simply added them both to the risotto a few minutes before the risotto finished cooking to be sufficiently heated through.

To make a creamy risotto, add marscapone and stir until smooth.

At this point in the cooking process, I had a hard time not eating all the risotto before I could get it on the plate to photograph!

Serve the risotto with a squeeze of lemon and some fresh parsley for garnish. 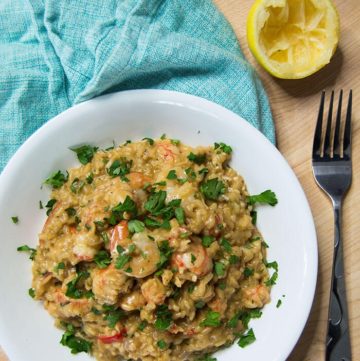 The Starving Chef
Risotto is an easy but impressive dish that can be dressed up or down, depending on your mood.
Print Recipe Pin Recipe
Prep Time 30 mins
Cook Time 30 mins
Total Time 1 hr
Course Main Course
Cuisine Dinner, Rice, Seafood
Servings 6

Keyword lobster, rice, risotto, seafood, shrimp
Tried this recipe?Let us know how it was!