Long ago the four main cooking elements seasoned together in harmony.

Then everything changed when the oven burned the sh*t out of my first recipe!

Avatar the last Airbender is hands down one of my all time favorite television shows and With a new avatar series on the horizon, I decided it was high time to dip my toes back into the world of bending.

I’ve dabbled in the arts of foodbending before, with Water Tribe soup, Air Nation fruit pies and Fire Nation turkey-duck legs. I even spent some time exploring the cuisine of Republic City from the Legend of Korra with street gruel, smoked fish and Bolin’s favorite dumplings.

Today, we are heading to the city of Omashu to meet up with the Cabbage Merchant for a fresh cabbage egg roll bowl – hopefully his cart is in good standing today…

Looks like there’s going to be a sale on shredded cabbage!

From elephant koi to moon peaches – when it comes food in the earth kingdom, they boast a rich and vibrant range of cuisines. Cabbage just so happens to be one of the more versatile foods to come out the earth kingdom, making it a common ingredient in everything from cabbage bowls to cabbage cookies – that is, if you can get your hands on them while they’re still fresh. 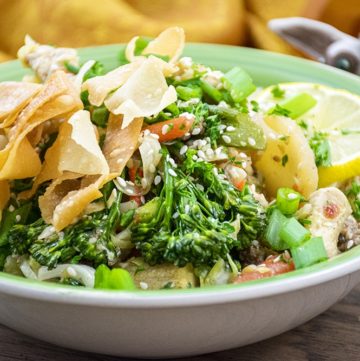 Keyword cabbage, sausage, wonton
Tried this recipe?Let us know how it was!