These cabbage wontons are a super quick version of it’s rolled counterpart! I really wanted egg rolls with my beef stir fry, but settled for a smaller, yet equally delicious, cabbage filled wonton.

I’ve made seriously simple egg rolls in the past, as one of the first ever recipes on my blog, so it felt appropriate to give the recipe some new life, with essentially the same ingredients. What’s awesome about this recipe is that the cabbage can actually be found prepackaged as cole slaw mix, without the slaw dressing, so there’s very little to actually prep for this dish.

Just quickly sauté the cabbage in a teaspoon of sesame or olive oil until barely wilted. Then add a splash of soy sauce and stir until the moisture is mostly dissolved. Let the filling cool for a few minutes before trying to fold it into the wonton wrappers.

Seal each corner with some water and pinch the edges closed. Then use a deep fryer at 400°F or a small sauce pan filled with two inches of oil to fry the wontons until they are golden brown and crispy.

I served mine alongside sweet an sour sauce and a steak stir fry! It’s just like a bite sized bit of awesomeness. 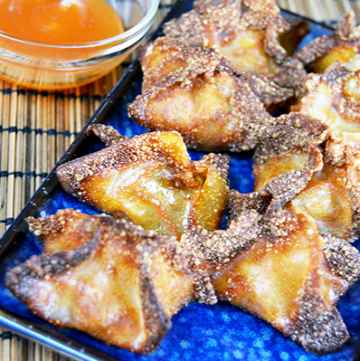 Keyword cabbage, deep fried, wonton
Tried this recipe?Let us know how it was!