We’ve been trying to eat healthier in our household lately, so I’ve been on the hunt for delicious alternatives to our usually carb-y meals. Noodles have always been a weeknight go-to meal, but now that I have a spiralizer and homegrown zucchini in my yard, ZOODLES have been all the rage.

I mean, just look at this giant zucchini I pulled out of my garden – first one I ever grew from seed, actually. It weighed in at almost 2 pounds! To celebrate my growth as a gardener, I of course had to make some zoodles with it.

My boss got me this fancy spiralizer that can make thin or thick zoodles, and even zoodle sheets for lasagna (recipe coming soon?). I recommend using the thicker zoodles when cooking them in a skillet, as this recipe calls for.

So. Many. Zoodles. Roughly chop the zoodles a few times to break them apart – otherwise you’ll end up with a nearly endless zoodle!

Once the zoodles are ready, saute the shrimp and andouille sausage. If you are going for a vegetarian version, cauliflower or broccoli can be used instead!

Once the shrimp and sausage have cooked, remove them from the pan and deglaze the pan with the white wine before tossing in the onions and peppers.

After the onions and peppers have softened, stir in the chopped tomato, garlic and mushrooms and stir until the tomatoes have lost most of their moisture. Squeeze the lemon directly into the skillet, taking care to catch any seeds.

Once most of the liquid has evaporated from the pan, add the zoodles. They cook quickly, so immediately add the cajun spice blend and use tongs to incorporate the zoodles into the onion and pepper mix. Pour in the chicken broth, Worcestershire sauce and a dash of habanero pepper sauce, if you’re daring.

Cook the zoodles to your desired doneness – some people prefer less cooked zoodles, where they still have a crunch, while others prefer them totally sauted and similar to noodles in texture.

However you like them, throw back in the shrimp and sausage and stir into the zoodles to reheat just prior to serving.

What’s your favorite zoodle recipe? Let me know in the comments! 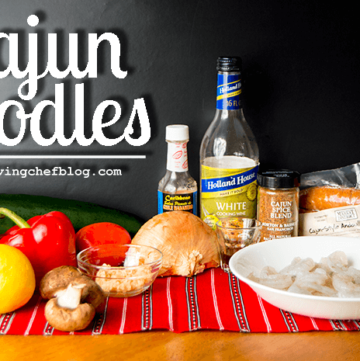 Keyword cajun, shrimp, zoodles
Tried this recipe?Let us know how it was!