“When you play the game of thrones, you win or you die. There is no middle ground.”

As the premiere of Game of Thrones approaches, I’ve been preparing Westeros themed meals in anticipation for the big day. If you aren’t caught up on Game of Thrones quite yet, be warned there may be some mild spoilers from the sixth season in this post!

Cersei Lannister is the epitome of evil. As bitter as she is cunning, she will undoubtedly rule Kings Landing with a sadistic iron thumb. However, being from royalty, she’s not without her high standards not only for herself, but her remaining family. Despite being the most hated woman in the kingdom, she would still demand the highest quality of food.

I’d like to think at the peak of her power, she had fresh produce pulled from the fields daily and had her salads are dressed with an aged balsamic, royal honey and pepper jam vinaigrette. A perfect combination of sweet, sour and spicy.

Cersei would also probably find the use of dragon fruit ironic and empowering as she confidentally faces the new threat of a younger queen from across the seven seas. Dragon fruit pairs nicely with sour apples as it’s taste is more mellow, but still adds nice texture.

Of course, the sour apples would be a thinly veiled attempt from the cooks in the kitchen to accurately reflect Cersei’s personality on the plate. They’d also pull the bitterest of greens and toss the salad with pine nuts to really get across the point.

But Cersei probably would have loved the crisscross of bitterness and sweetness, but still had the cooks in the the kitchen killed by the zombie Mountain regardless.

As a queen without shame, Cersei Lannister is certainly going to put up a fight to protect Kings Landing from Daenerys Targaryen – even if that means killing every peasant in it. 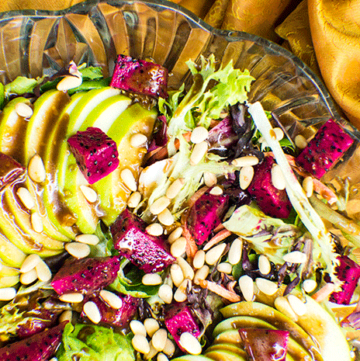 Keyword dragon fruit, Game of Thrones, salad
Tried this recipe?Let us know how it was!