Indian cuisine is a staple in our household, so I am always looking for delicious new recipes to try. These samosas are a healthier take on the traditionally potato stuffed pockets of goodness.

I borrowed this recipe from my fantasy future husband, Gordon Ramsay (sorry Nick) after discovering I was somehow out of potatoes in my pantry. But what these samosas lack in calories, they make up for with tons of flavor! So it’s win win for everyone (even Nick because he gets to eat them!).

To start, you’ll need to cook the chickpeas until they are tender. Once they are softened, chickpeas actually mash up pretty similarly to potatoes, so if you’ve ever boiled potatoes before, you’ll sort of know the texture to look for when the chickpeas are ready to get mashed.

The “hardest” part about this recipe is folding up the samosas. Admittedly, I needed to watch a couple videos on Youtube to get it right. But once you get the technique down, you’ll never forget it.

Essentially, it’s easiest to use a rectangular shaped strip of dough – I actually used wonton wrappers cut in half! Lay the rectangle horizontal in front of you, then use some water to wet a little bit less than half of the right side of the rectangle. Fold the left side over so that about a quarter inch of the edge comes in contact with the wet side, so that it forms a triangle. Use your fingers to create a pocket, then wrap the rest of the wet side around so that you have a cone shape in your left hand and a strip of dough exposed on the other side. It’s pretty difficult to explain, so I definitely recommend checking out a few tutorial videos, if you can!

Fill the pocket side with about two tablespoons of the mashed chickpea mixture. Use the exposed flap of dough to seal in the filling, then use some water to seal the edges. It’s best to let the samosas dry for a few minutes before popping them into the hot oil.

Keep an eye on your samosas as you fry them – they are super easy to overcook and burn if you aren’t careful. My samosas fried for 3-4 minutes at around 325 F. I made a simple raita from Greek yogurt and shredded cucumber for dipping (you can also make a quick mint chutney from scratch), then served my samosas alongside some amazingly easy chicken tikka masala and pizza stone naan. I’m hungry all over – time to invite over Gordon! 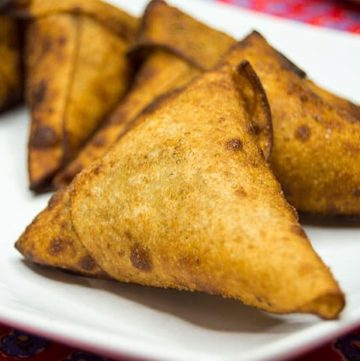 Keyword chickpea, curry, deep fried
Tried this recipe?Let us know how it was!