These stuffed mushrooms are uhhhhmazing. A perfect appetizer, side dish, or snack – you’ll be rethinking everything you’ve ever thought about fungus filled foods. If you’ve never had a stuffed mushroom before, stop. Drop whatever you are doing and go to the store and get these ingredients. RIGHT NOW.

Start by separating the stems from the mushroom tops as you wash the mushrooms. Pat the shrooms dry with a paper towel and set tops aside.

Next chop the onion, mince the garlic, separate the yolk, and bring cream cheese to room temp. This particular chorizo is actually from the Westside Market in Cleveland and it is simply amazing. While I have used hot Italian sausage before, this authentic chorizo from a bustling market somehow makes the mushrooms that much more amazing. Admittedly, I probably spent WAY too much at the Westside Market as I darted from stand to stand picking up the most amazing lamb shanks, stuffed clams, and bison fillets. Get the real stuff, if you can. It’s worth the cost (and also why I’m a Starving Chef!)

Toss the chorizo into a pan over medium high heat and stir until browned. When your chorizo is cooked and crumbly, set aside to cool. Or if you are in a rush, as I as, set on your porch in freezing cold temperatures while you complete the rest of the steps. It actually blends better when it’s cool and spreads better into the mushroom cavities. We’re getting there.

Toss your chopped stems, onion, and garlic into the same pan without cleaning it and cook until tender.

Now add your white wine and let it evaporate.

Once it is nice and bubbly, remove from heat and let cool for a few minutes before adding to your cooling chorizo.

While your stems and chorizo finish cooling, mix together the Parmesan, cream cheese, and egg yolk. Feel free to add some parsley here too, you know, for color. Then mix your cream cheese blend with your chorizo mix and stir until combined.

Finally, shmear as much of your delicious chorizo concoction into the mushroom top’s cavities and toss into the oven at 350 for about 20-25 minutes, or until golden on top and the Parmesan is melted. Serve with a nice big slab of bison, for bonus points. Let me know if you try out this recipe! It’s simple AND impressive, perfect for a party, couple’s dinner, or to impress possible future-in-laws? 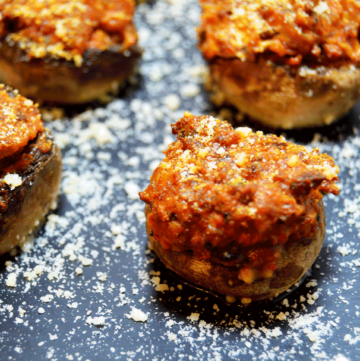 Keyword finger food, mushrooms, stuffed
Tried this recipe?Let us know how it was!