I fiend for cinnamon rolls sometimes. Something about their ooey-gooey cinnamon-rolly goodness just really gets me going! And thanks to the awesome invention of canned dough, I can make myself some cinnamon bites in just a few minutes, whenever I please. I’ve made cinnamon pull apart bread before, from scratch, while I was in college. It was one of the first ever recipes I attempted to make while still in school that I actually managed to blog about after. This round, I wanted to make the cooking part much faster, so I opted to use canned biscuits as my dough, but feel free to make that part from scratch if you’d like.

For the muffins, all you’ll need is brown and white sugar, cinnamon, and butter. Cut the biscuits into quarters. Pro Tip: Use scissors to cut the dough faster than cutting with a knife!

Then just pour on the melted butter and toss until all the dough is coated. Toss in the sugars and cinnamon and use your hands to stir the dough until coated completely.

Place the cinnamon sugar covered dough into greased muffin tins and then bake at 350 F for 15-20 minutes. The muffins should be puffed up and golden brown when ready. While the muffins are baking whisk together the icing ingredients until creamy.

Let the muffins cool for a few minutes, but while they are still warm, pour the sugar glaze over the tops of the muffins. 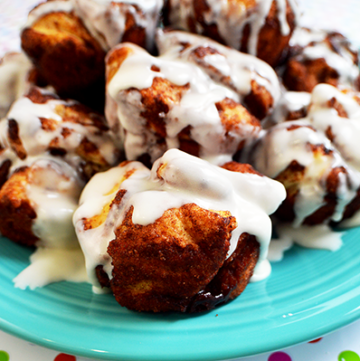 Keyword breakfast, cinnamon, dessert, sugar
Tried this recipe?Let us know how it was!