Halloween is one of my favorite holidays because I get to make SPOOKY recipes like this one!

These cinnamon rolls are scary easy – heck, you don’t even have to know how to bake to make them!

That’s right; while all of the effort of making your own cinnamon rolls from scratch should be applauded, this recipe actually works BETTER when you use the canned variety.

All you need is your favorite cinnamon rolls – just make sure that they can pull apart. It seems that the Pilsbury brand does NOT do this. So DON’T buy Pilsbury brand. I’m sure they taste great (in fact, I know they do!) but they simply won’t work with this recipe. I had the most success with the Our Family value brand, but I’m sure there are other brands that have un-roll-able cinnamon rolls. 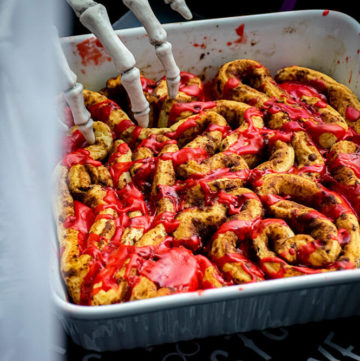 Keyword cinnamon, icing
Tried this recipe?Let us know how it was!