Every year during the last week of July, my love for all things Harry Potter takes over my kitchen and enchants my recipes. From cakes to quiche, there’s nothing I can’t make fit into my Harry Potter obsession.

Thoughout the books, Fred and George Weasley are known for their pranks and creative hijinks around Hogwarts. One such concoction was the Skiving Snackbox, which contained a variety of treats that would give the consumer a mild ailment – something to get the student out of class, after which they could eat the second half of the treat and cure themselves.

The most popular of these candies (after being throughly tested on unsuspecting first years) went on to be sold in the Weasley twin’s joke shop on Diagon Alley.

Skiving Snackboxes can actually be found at the real life Wizarding World at Universal Studios in Oraldno, Florida! I just so happened to go there a few years ago and saved a few of the candies from my Skiving Snackbox to recreate for Muggles at home!

In these real life boxes you can find the Muggle equivalents of fever fudge, fainting fancies and puking pastilles. They also have tons of other ficitional treats like U-No-Poo, Exploding Bonbons and Jelly Slugs – all based on treats found in the books and movies!

For this magical recreation, I will be focusing on nosebleed nougats.

The Muggle-friendly version of nosebleed nougats are actually quite delicious. Soft and chewy bars of marshmallow are coated in milk chocolate and topped with sugar pearls and pistacchios.

Despite the fact that mine are a bit lighter in color than the ones from Universal Studios, I absolutely nailed the taste and texture of these candies.

I’m a regular Hermione Granger in the kitchen if I do say so myself.

Here’s what you need to make your very own (Muggle-safe) nosebleed nougats – with homemade marshmallow filling!

Marshmallows comes together just like magic. And they are actually much easier to make than one might think as long as you have the proper tools (a magic wand definitely makes this go faster!). One tool that will make this infinitely easier is a stand mixer with a whisk attachment!

First, bloom the gelatin in the cold water in the bowl of a stand mixer until it is nearly doubled in size and completely activated. While it’s blooming, I like to lightly grease a baking sheet that has been lined with parchment – or more preferably a silicone mat. Then dust the entire sheet edge to edge with powdered sugar. You’ll thank yourself for prepping this step later.

After that, simmer together the sugar, corn syrup and water until it reaches 240°F. It’s important it gets this hot so that the sugar reaches the “soft ball” stage and remains pliable and pillowy.

As soon as the sugar reaches 240°F, slowly pour it into the gelatin while mixer is on its lowest setting. Once all of the sugar syrup liquid has been added, the mixer can be slowly increased in speed until it is whipping the mix. Whip until soft but firm peaks form and the sugar takes on the appearance of marshmallow fluff.

Once the fluff can hold a soft peak, pour it onto the prepped baking sheet and dust the top with more powdered sugar. Let it set for 6-8 hours at room temperature – and voila! You have one huge marshmallow that is now ready to be cut into strips and coated with chocolate.

I personally think it’s impressive that Fred and George were creating all kinds of charmed treats in the boys dormitory at Hogwarts – and then later went on to create their very own joke shop based off their favorite experiments!

What kind of magical recipes would you like to see more of? Let me know down in the comments below! 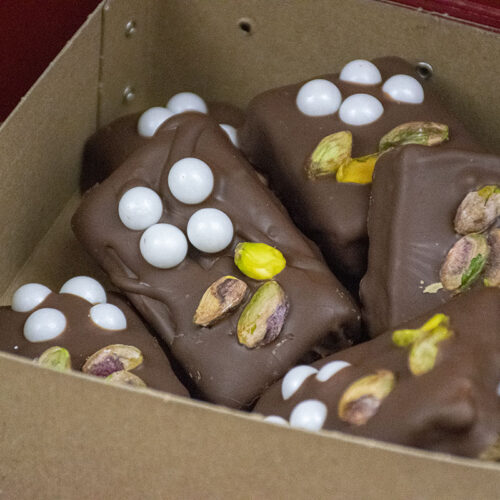 Keyword copycat, Harry Potter
Tried this recipe?Let us know how it was!