Hold on to your broomsticks, Hungry People.

Thoughout the books and movies, Fred and George are known for their highjinks at Hogwarts. One of their very first creations were Skiving Snackboxes – mysterious treat boxes that contained treats that would give the consumer an ailment; something strong enough for one to be excused from class but not make them seriously ill.

One side of the candy would induce the illness and then once excused from class, the second half would cure the consumer leaving them to do what they pleased with their new found free time.

One such treat that always piqued my interest – regardless of how gross it sounded – was a puking pastille. Created by Fred and George Weasley as a prank treat that could get you out of class, puking pastilles were later sold as a treat at their Weasley’s Wizard Wheezes location in Diagon Alley.

You can actually buy these candies in real life at Universal Studios’ Wizarding World! I kept a few candies to recreate – so while they were a bit faded in color, you still get the idea of what they would have looked like.

But Why Are They ROUND?

Well… to put it simply… It’s very difficult to find a triangle mold that is this shape in the Muggle world.

While the triangle candies from Universal are certainly mass produced and likely use something like an injection mold to create the shape and dual color tones, I wanted to make that my candies could in fact be recreated at home by Muggles.

So instead, I used a smaller set of round molds that came with my set of round molds I got to make the fainting fancies! Plus if you want, you can easily press two halves of the candies together while they are still warm to create a two-toned effect.

Or you can leave them in separate halves (which honestly makes them a bit easier to consume!).

I was able to find a single triangle shape mold on Amazon that had other jewel shapes included on the hard plastic mold. Unfortunately, this made it difficult to quickly remove and press the candies together while they were still warm, like you can easily do with the silicone molds.

Another downside to getting the jewel shaped mold was that there were only four slots for making the candies, meaning it would have taken considerably longer to create the candies – and again, I want to make these as easy as I can for you Muggles!

So if you ever happen to find a triangle / diamond shaped mold that is a simlar size or can make more than just a couple candies at a time, let me know down in the comments so I can recreate this recipe!

The REAL MAGIC is in the Ingredients

If you have never played with isomalt before, this recipe will give you a chance to test out a new ingredient in a a magical way! 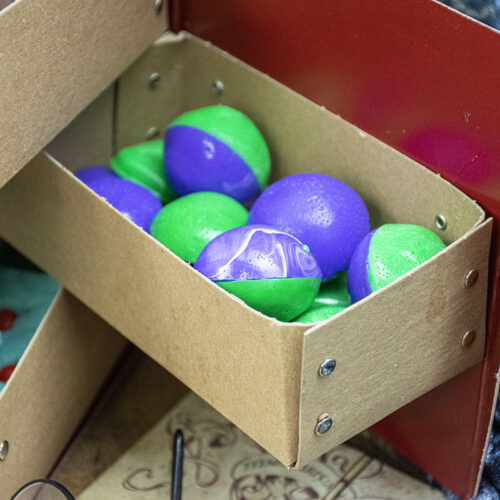 Keyword candy, Harry Potter
Tried this recipe?Let us know how it was!