My boyfriend and I are pretty much obsessed with gumbo. Anytime we see it on a menu, we get it. With Mardi Gras coming up, our cravings intensified for the spicy, rice-y, bowl of deliciousness. I’ve been practicing my Southern cooking in preparation for Mardi Gras – I even made some super simple shrimp po’boys for us to really get us in the Fat Tuesday Spirit.

Gumbo is traditionally made with andouille sausage, chicken, and shrimp in a medley of vegetables that include tomatoes, peppers, onions, and okra. I accidentally forgot to pick up okra for my gumbo, so it won’t be mentioned in this recipe, but definitely feel free to pick some up and add it to your own if you are determined to be extra authentic.

Gumbo is so packed with flavor and is pretty easy to adjust to your own tastes. We like our gumbo extra spicy, so I opted to add some extra Cajun spice mix into mine. A great gumbo needs a great broth, so I made mine with chicken and a variety of fresh vegetables.

We’ll start with the vegetables by first dicing them up into pieces. I started with the heartier vegetables like the red onion and celery and added the peppers, tomatoes, and other seasonings in as I went.

The next step is to add the flour to the vegetables and coat them all before adding the chicken broth. The broth should be just barely a simmer.

Cook the chicken and andouille sausage in a separate pan or use pre-cooked varieties. The shrimp can be tossed in raw, but be sure to add those last so they don’t turn rubbery.

Let the gumbo simmer on a medium low for fifteen to twenty minutes. I used this time to steam the rice and let the gumbo sauce thicken up.

Serve the gumbo with a large serving of rice – be careful, this gumbo is extra spicy!

We dipped French bread in our gumbo, but corn bread or any other crusty bread will work instead of (or in addition to) white rice. Have a safe and happy Mardi Gras and let the good times roll! 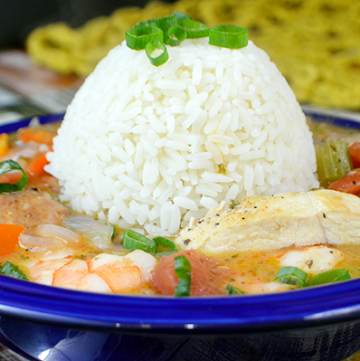 Keyword chicken, Mardi Gras, sausage, shrimp, soup
Tried this recipe?Let us know how it was!