Today we’re making something I’ve wanted to make ever since I first watched the movie: the Cubanos from Chef.

If you’ve never heard of Chef – pause this video and go find a place to watch it. Rent it if you have to. It’s hands down one of the best movies of the decade – and not for the reasons you might think. You don’t even need to be a foodie to appreciate this movie.

While the main plot revolves around Jon Favreau’s character reigniting his love for food, its comedy-drama movie about reinventing yourself, learning to get back to the basics and the overall feel good theme of father-son relationship building, all from the back of a Miami food truck.

The movie itself is loosely based on Roy Choi’s involvement in the food truck industry – and Roy himself sent John Favreau to train in French culinary school just to prepare for his role in this movie. And the training certainly paid off, according to John himself. And you can certainly feel his ease in the kitchen throughout the movie, but especially in the opening scenes where he is preparing some of the most beautifully delicious food I’ve ever seen. You can tell a lot of love and crafting went into each of the dishes so they would be visually stunning – and just from appearance alone you know they all gotta taste good too.

The star of the movie is truly the Cubanos that Martin whips up from a large pork shoulder and a variety of citrus and herbs. In real life, this recipe is based on Roy Choi’s famous mojo pork recipe that he uses on his own real life food trucks.

Since we aren’t cooking for a crowd, we’ll start with a pound and a half of boneless pork shoulder and the ingredients for Roy Choi’s Mojo Pork Marinade:

I have straight up been craving this cubano sandwich since I first watched Chef way back in 2014. It’s definitely one of my favorite feel good movies – absolutely worth the watch!

What fictional feast should I cook up next? Leave your suggestions in the comments below! 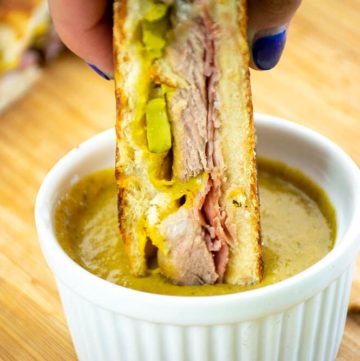 Keyword Cuban, grill, sandwich
Tried this recipe?Let us know how it was!