The new season of Stranger Things dropped this weekend on Netflix – and I’d be lying if I said I didn’t watch the entire season twice through already. Inspired by all things 80s themed and audio-synth tuned, I turned my kitchen Upsidedown by ripping a hole in spacetime and calling up some demogorgons.

If you aren’t caught up on both seasons of Stranger Things, be warned: there may be mild spoilers in this post!

The demogorgon was the main nemesis on the first season of Stranger Things. In season two, the demogorgon is back and more horrifying than ever – a wicked fast demogorgon-dog hybrid controlled by the oh-so-mysterious smoke monster.

But here’s the thing about the demogorgon – it’s entire face is a giant mouth, intent on devouring you. My meatloaf imitates the terrifying fanged mouth of the demogorgon, but this time, YOU get to bite back!

Onions act as the teeth of the demogorgon mouth and the whole thing is brushed with a classic, but extra spicy, ketchup sauce that looks eerily like blood…

Of course, what Stranger Things feast is complete without some Eggo waffles? I served mine up a la “chicken waffles” style and made a fun version of “demogorgon waffles” instead.

This season of Stranger Things was awesome and actually sets up a third (and probably more) seasons to come after. The gang has more to worry about than just demogorgons in the future.

I’m ready to binge watch the entire series again and again until then – and dine on demogorgon to tide my appetite for the Upsidedown. 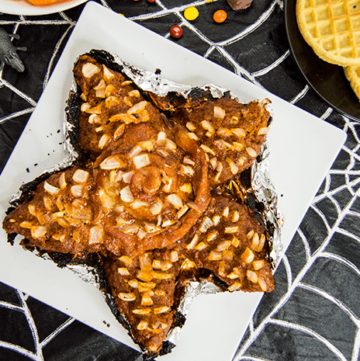 Keyword meatloaf, turkey
Tried this recipe?Let us know how it was!