Grab your portkeys, hungry people. It’s Harry Potter week. Every year during the last week of July, I transfigure my kitchen into Hogwarts. This year especially, I think everyone deserves a stiff drink.

That’s right Muggles. This year we’re exploring the world of Harry Potter by concocting our own magical cocktails.

For our first drink, we find ourselves locked into a Potions class in the dungeons – where we’ll be brewing the dangerous sleeping potion Draught of Living Death.

If the Deathly Hallows were a cocktail, this is the form they would take. Three powerful liquors combine to make a sweet and tart potion that will assuredly knock you out after only a few sips.

In the sixth movie, The Half Blood Prince, Harry uses notes he finds in his used potions textbook to brew a perfect Draught of Death – one which Professor Slughorn claimed that “one drop would kill them all.” Which is sort of silly considering it’s a sleeping potion not a poison.

I’ve never been a big drinker, so this foray into the dark arts of potion making was quite an adventure for me. And the dangerous part about this drink in particular is that is absolutely lives up to its name. After two or three of these and you’ll definitely be feeling some kind of living death the next morning.

Made with a combination of vodka, rum and gin, it’s just the right amount of sweet and tangy without knocking you out cold with the taste of alcohol – which makes these drinks all the more dangerous.

I’d like to think this is the cocktail that Dumbledore would have sipped on while researching where to find the next Horcrux. It’s just dark and fruity enough that I think he would have enjoyed it alongside a dangerous handful of Bertie Bott’s Every Flavor Beans.

I definitely feel confident after a couple of these I’d go hunting down Horcruxes before falling asleep in Mad Eye Moody’s cabinet.

What’s your favorite Harry Potter themed drink? Let me know down in the comments! 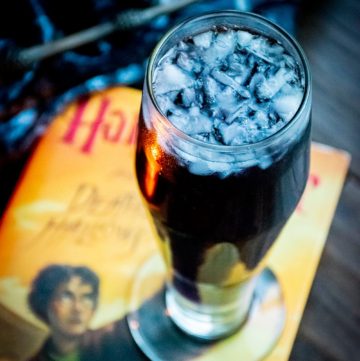 Keyword alcohol, cocktails, drinks, Harry Potter
Tried this recipe?Let us know how it was!