Stuffing is definitely the highlight of Thanksgiving for me. Ever since I was little, I have specifically asked for extra stuffing to be provided on Thanksgiving – generally a homemade stuffing and that classic Stove Top stuffing. In another recipe, I actually use stuffing as a pie crust (recipe coming soon!), so yeah…I like, really love stuffing.

This time, despite my love for the boxed stuff, I wanted to make my own easy stuffing from scratch. Around this time of year, you may notice an abundance of bags of cubed bread, just for making stuffing. Use fresh ingredients like apples, leeks, and red onions with fresh herbs like rosemary to really show off the flavors of fall.

First, chop up the apple and veggies and toss into a skillet with some butter. Saute over medium high heat until the apples are beginning to caramelize and brown. Season with salt and pepper.

As the veggies are softening, toss together the golden raisins and cranberries into the bread cubes.

Arrange the bread cubes on the bottom of a roasting pan and pour the broth over all of the bread. Use extra if there are any dry spots. Let the bread soak for 15 minutes, or while you prepare the turkey legs, then dot with butter.

Since I was also making my test run turkey I arranged a few turkey legs into the stuffing before roasting, but that part is totally optional. 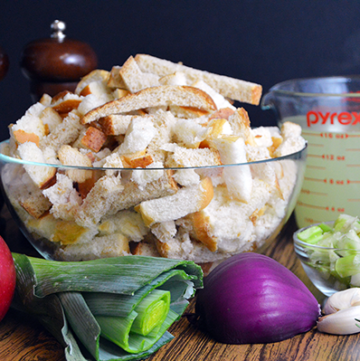 Keyword apples, bread, leek, Thanksgiving
Tried this recipe?Let us know how it was!