Today we are heading out of the kitchen and into Stardew Valley for some of the most relaxing simulated home cooking around.

Fiddleheads sort of remind me of cross between asparagus and okra – or maybe spinach and mushrooms. Texture wise they are closer to asparagus with their snap and crunch but they have a more earthy flavor that gives off hints of nuttiness. It’s definitely one of the more unique flavors I’ve tried.

Remember to season the dish as you go – we definitely do not want our risotto to be bland like it apparently is in Stardew Valley.

Move over queen of sauce, there’s a new cook in town.

For this recipe we are using aborio rice, which is usually what risotto is made from. The game for some reason doesn’t realize that rice is literally the main component of risotto. I’m really starting to not trust that the queen of sauce actually knows how to cook anything…

One of the most important elements of a risotto is the cheese. Most traditional risotto will use parmesan cheese – but for this recipe, we’re going to use an iridium grade cheese called gruyere. You can typically find this at any Joja mart or Pierres Specialty Stores – usually the cheap shredded variety works best.

I went back into the game and added up all my play times between my PC and mobile versions and I’ve played over 300 hours of Stardew Valley – the fact that I’m not sick of it yet should give you some indication on how much I love this game. Being able to make a recipe from Stardew Valley was a ton of fun, especially playing out the recipe in the game as well as in real life. If this is something you guys enjoyed and would like to see more of, let me know which recipes from Stardew you’d like to see me make next! 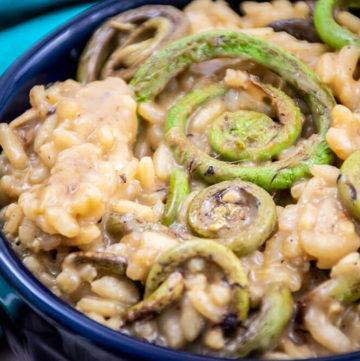 Keyword fiddlehead, risotto, video games
Tried this recipe?Let us know how it was!