My garden has been exploding lately, thanks in part to several days of miserable rain. When I started my garden, I had no idea how HUGE eggplants can get – and quickly!

There are many ways you can prepare your eggplants, but I chose to do mine over an open fire in our backyard! With these week’s recipe challenge as fire, it was only appropriate! I felt like a Khaleesi placing my giant, silver eggs on the fire and watching them roast.

I am the Mother of Eggplants. If you don’t want to roast your eggplants on an open fire, you can always opt to place them under a broiler until the skin is nice and charred. No matter how you do it, the key to this recipe is cooking the eggplants someplace HOT.

The eggplants will be charred on the outside, but should be easy to cut open to reveal their soft inner flesh – cooked to perfection! I recommend using smaller eggplants, which will carry less seeds, than giant eggplants, where the seeds are fully formed. You’ll want to scrape out as many of the fully formed seeds as possible, since they have a bitter taste.

Let the eggplant cool for a while while you make the tahini. I had no clue tahini was so simple to make. You can also use a store bought tahini sauce, but with only two ingredients, it’s hard for me to justify buying a whole jar when I can make the right amount as I need it!

Just toast the seeds until just darkened in color, then add the seeds into a food processor with some olive oil and puree until smooth. I used about three tablespoons of sesame seeds to four tablespoons of olive oil to result in a smooth tahini sauce.

Then in a large bowl, stir together the eggplant with some fresh parsley, garlic, cumin, and lemon juice.

Use a food processor to blend the baba ghanoush until creamy.

Baba ghanoush is best enjoyed room temperature, but we had no problems eating it warm or cold!

Serve the baba ghanoush alongside fresh pita bread and vegetables for dipping. Its baba delicious!

Is it spelled “ghanoush” or “ghanouj” – let me know in the comments! 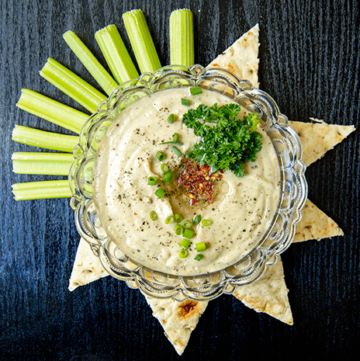 Keyword campfire, eggplant
Tried this recipe?Let us know how it was!