Caution: Mild Legend of Korra spoilers in this post!

We return to the Earth Kingdom to visit Ba Sing Se, the home of Bolin’s and Mako’s biological family, but also the home of the Earth Queen – one of the least savory people in the Avatar Universe. Between kidnapping the air benders for her own air army to her demanding demeanor, the Earth Queen is not one to be trifled with.

If there is one thing the Earth Queen does well, however, is that she is very fond of luxury. One of her favorite delicacies, much to many Avatar fan’s horror, is flying bison meat. Under her rule, the meat became extremely popular in Ba Sing Se. While the Avatar lover in me cringes at the thought of our favorite flying bisons being eaten, the meat lover in me brings out my inner Sokka (the “meat and sarcasm guy.”) If it makes anyone feel better, I’m sure once Zaheer killed the Earth Queen and liberated Ba Sing Se that flying bison meat dropped in popularity and all of the flying bison lived happily ever after! Sure, I made that last part up, but I like to pretend it’s cannon.

Morbid thoughts about Appa being eaten aside, these flying bison burgers are actually super delicious (made from their non-flying counterparts). Bison is sweeter than beef and as lean as chicken, so it’s healthy benefits are a huge factor in why bison is better (than pretty much anything).

I left the bison meat more-or-less plain, with the exception of some salt and pepper, to really emphasize the amazingness that is bison meat. Bison burgers can be dressed just like any other burger, but they are best when served alongside some other savory and spicy flavors like mushrooms, onions, and jalapeños.

Start by caramelizing the onions on low heat for about 30 minutes until they are browned, sweet, and tender.

When the onions are done, and as you start cooking the burgers, sauté the mushrooms and jalapeños together in a large skillet with some butter until the mushrooms have darkened and have released their moisture.

While the onions are finishing, form the bison meat into patties and lay on a hot grill then, and this is important, do not move the burgers for at least 4-5 minutes. This ensures some beautiful grill lines as well as thorough cooking.

covered mine with a pan lid, then added a tablespoon of water to steam the bison for a few minutes too. Unfortunately I didn’t have a lid for my grill pan, but a circular one fit in nicely and did an okay job. If I were on a real grill, I’d make sure that the burgers were completely sealed in.

Finally, let the burgers rest for at least five minutes prior to serving to avoid any soggy buns. Top the burgers with the caramelized onions and spicy jalapeño mushrooms. I also used some marbled Colby cheddar cheese, fresh romaine lettuce, and tomatoes on mine.

I served my bison burger with some of Bolin’s favorite dumplings and a garlic ginger infused potato inspired by Zaofu (recipe coming soon!). Another benefit of bison – it goes great with near everything! While the original Gaang might have objected to eating these delicious burgers – and lets be honest, when you ride around on a flying bison most of the time, you probably aren’t going to be keen on eating one – the times have changed and in a modern-ish society where benders and non-benders alike can coexist, flying bison will surely be on the menu for years to come (unless you follow my version of events). 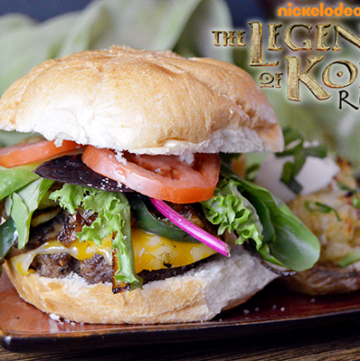 Keyword burger, mushrooms
Tried this recipe?Let us know how it was!