Last autumn, Nick, myself, and some of our friends decided to go on a Western Caribbean cruise that stopped in such places as Mexico, Honduras, and Belize. While in Belize, we traveled to a small island known to the locals as “Go Slow Island” seemingly in the middle of the ocean.

There we ate at a small restaurant where I’m sure they got all of their seafood fresh off the reef just off shore. I had a lobster kabob, fresh cole slaw, and this amazing garlic bread that I can describe only as “garlic French toast” – instead of being sweet and covered with syrup, this big slice of bread was soaked in garlic and butter instead. And it. was. amazing. (And this is the only picture of that I got – check the back right of the plate:)

Ever since this encounter, I have vowed to make it for myself someday. Well folks, it only took nine months, but I’m finally getting around to it. Using some ingredients I picked up from my local farmers market, I set upon making me some garlic French toast.

While the bread used on the island was likely not Brioche, but probably a similar soft bread instead, I used Brioche bcause it’s traditionally the best bread to make French toast with. You can use whatever type of white bread you have on hand, even stale, day old bread is perfect to use for French toast too.

The bread should be at least an inch thick. Just whisk together the eggs, garlic, and parsley, then toss in the bread. The thicker the bread, the longer the bread should soak in the garlic and egg mixture – but I recommend letting the bread soak (flipping once to cover evenly) for at least 3-5 minutes. Then just slap it on a skillet over medium heat until golden brown on each side.

I served mine with some jerk chicken, because unfortunately, real lobster wasn’t in the budget this week (or like, ever). 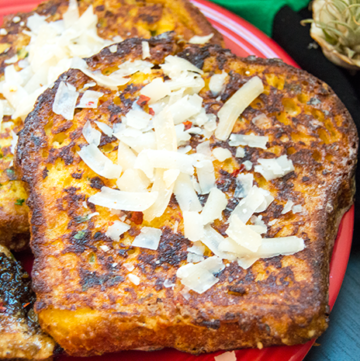 Keyword brioche, eggs, garlic
Tried this recipe?Let us know how it was!