Summer is quickly approaching, which means I’m stockpiling my campfire recipes for all the cooking over an open fire that I plan on doing in our new home!

The past few, and next several, weeks have been super hectic, but I managed to steal away for some little R&R back in my hometown. I took advantage of my parents fire pit and treated them to a backyard bonfire complete with a three course meal.

I loaded the bonfire with all sorts of goodies, including chicken and veggies, succotash, potatoes and even some desserts. For an appetizer, I wrapped up about a pound of shrimp in a foil packet and tossed in whole cloves of garlic, fresh squeezed lemon juice and butter, then baked it until the shrimp were a happy pink color.

The packet should be flat enough that the shrimp are almost in a single layer. Because the shrimp will cook quickly, it will need flipped only after about five or ten minutes, and will be ready about five minutes after that. 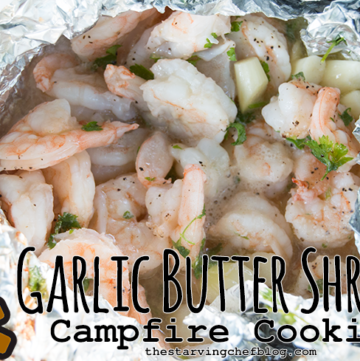 Keyword butter, foil, garlic, shrimp
Tried this recipe?Let us know how it was!