We live in a world of giant food. Every day there seems to be something else supersized. A few weeks ago the challenge was “fad foods” – I immediately knew what I had to make: a GIANT cinnamon roll baked in cast iron, nonetheless, to truly play into the hottest trends of the season.

At over nine inches wide and five inches thick, this cinnamon roll certainly fit the bill of GIANT. The massive roll comprises of layers of homemade dough stuffed with a cinnamon and demerara sugar filling.

Of course, no cinnamon roll is complete without a generously helping of frosting – and not just any frosting; thick cream cheese icing that oozes into every nook and cranny.

The demerara sugar is the secret to the perfect GIANT cinnamon roll. While the typical mixture of butter, brown sugar and butter works for your standard size cinnamon roll, the big grains of demerara add a bit of texture and enhance the brown sugar flavor.

Cooking the cinnamon roll helps to evenly cook the giant cinnamon roll all the way through. No room for soggy bottoms or raw centers in this kitchen!

The final result is something beyond heavenly – several layers of cinnamon-y goodness sandwiched between a cake-like dough. In some instances, such as those regarding the size of cinnamon rolls, bigger really does mean better. 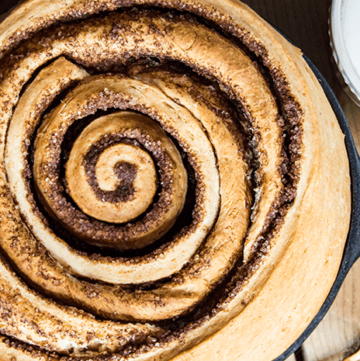 Keyword cast iron, cinnamon
Tried this recipe?Let us know how it was!