Every week, I participate in a weekly recipe challenge. Recently the theme was Nordic, which was extremely interesting to research since I could barely understand most of the recipes! Luckily, even though the language looked strange, the ingredients were familiar.

A popular dish in Sweden (and other Nordic countries) is gravlax, which is a dry cured salmon. The curing process for gravlax takes about three days in total. While you can totally buy your own gravlax and novalox prepackaged in grocery stores, DIY is definitely worth the challenge.

I’m a big fan of gravlax on a toasted bagel with cream cheese and capers, so I made a double batch of the gravlax. It’s really easy to freeze and use again later. For this recipe, you will only need about one filet, but the recipe measurements cures about a pound of skinless salmon.

Wrap the salmon tightly in plastic or in a baggie. The fish will lose a lot of moisture, so be sure to place it in a lined pan when you put it in the refrigerator. I placed a second baking sheet on top of the salmon and put heavy items like milk and orange juice on top to really help flatten the salmon to release it’s moisture.

The day before you are ready to serve your gravlax, prepare the hovmästarsås. Hovmästarsås is essentially a sweetened mustard sauce – which actually pairs well with an assortment of fish and poultry dishes (so keep any leftovers you might have for later!).

When ready to serve, remove the salmon from the plastic wrapping and scrape off as much of the remaining salt and dill as you can. Do NOT wash the salmon under water. I found that rubbing gently in a circular motion really helped when it came to getting the dill off.

Of course, you will not remove ALL of the dill, but try to get as much off as you can.

How you serve your gravlax and hovmästarsås together is up to you! I just so happen to have these neato croustades that I happened to pick up from a closing of a fancy grocery store for about 50 cents.

They are similar to wontons in texture and work as the perfect vessels to wrap up the gravlax in.I cut my gravlax into thin strips about a half inch thick and then cut a block of cream cheese into cubes and wrapped a strip of salmon around each. Then I pressed the salmon into a croustade and topped with fresh dill or a mini cherry tomato.

Drizzle on the hovmästarsås sauce or save it to the side for dipping!

How do you like to eat your gravlax? Let me know in the comments! 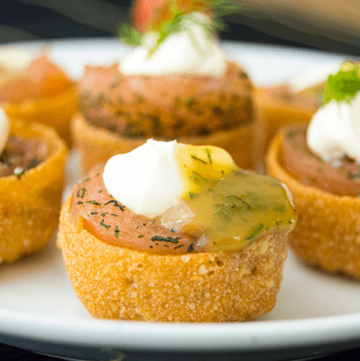 Keyword finger food, salmon
Tried this recipe?Let us know how it was!