“The Mountain” – formerly known as Gregor Clegane; and the brother of “The Hound,” Sandor Clegane – is arguably one of the most terrifying characters to ever appear in Westeros…and his reputation for smashing things preceeds him…

If you aren’t caught up on the most recent season of Game of Thrones – BE WARNED!! There’s gonna be BIG OL’ SPOILERS IN THIS POST!

We were introduced to the Mountain a few seasons ago during the time which Tyrion Lannister was being tried for the murder of Joffery – a trial, by combat.

Cersei chose Gregor Clegane to represent her son in the combat and Oberyn Martell offered to stand in Tyrion’s place…which as we all know, didn’t quite work out for the Viper…

Now I know in Sandor Clegane’s recipe for roasted hen that the Hound was the Clegane brother I would want to avoid at all costs; but after this past season, I am fully on #TeamHound for the inevitable CLEGANE BOWL. So get hyped – we’ll undoubtedly see the brothers clash some time during the final season.

The reason I say “fomerly known as Gregor Clegane” is because, as far as I can tell, he’s dead. He’s walking around, but he’s dead. But not like, undead, like how the Night King is undead. More like a “Zombie Mountain,” if you will.

One might say that the Mountain is twice baked – just like these potatoes. And I suppose after the fall of Westeros, should that happen; if he doesn’t join the army of the wights, then he could have a promising career smashing potatoes.

Whatever Qyburn did to the Mountain under the Red Keep is a mystery – Qyburn insists that the Moutain has taken a vow of silence, though personally I think it’s more likely that Qyburn is involved in some less-than-savory methods of…magical presevation. 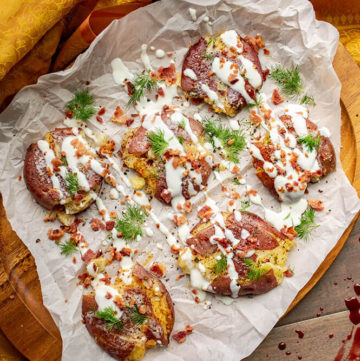 Keyword Game of Thrones, paprika, potatoes
Tried this recipe?Let us know how it was!