As football season ends (or begins, depending on when you are reading this), you need to be sure your tailgating and finger food game is on point. And who doesn’t love a good hanky panky?

Also known as “Polish mistakes” in some places, hanky pankies are a popular appetizer made from ground beef, sausage and cheddar cheese on a slice of dark rye or Jewish rye ‘party bread’ which is then toasted until the bread is nice and crispy.

The ground beef/sausage and cheese combo makes for a good dip too, so no worries if you can’t find party bread! In fact, I’m not a huge fan of rye bread myself, so I particularity enjoyed it served this way. However, my boyfriend and the rest of our guests are huge fans of hanky panky (going as far to request it specifically), so the rye bread was absolutely required for them. But with only six-ish ingredients, not including the bread, they are pretty hard to resist making anyways!

Begin by cooking the sausage and beef in a pan until brown and crumbled. I quickly rinsed mine off since I didn’t buy extra lean ground beef (on accident – lean beef is recommended), then returned the meat to the pan and added the salt, pepper, Worcestershire & cayenne pepper.

Next, stir in the cheddar cheese until melted and toss in a small handful of parsley, for color.

Let the beefy mix cool for a few minutes while you arrange the party breads on a baking sheet. I measured out about a tablespoon and a half of mix for each bread.

Then just pop the breads into the oven and bake until crispy and the cheese has melted the beef mixture sort of ‘into’ the bread. For optimal flavor – the hanky pankies are best devoured at room temperature or just above. It’s ideal to let the hanky panky cool for a bit before serving, but honestly, our party ate them essentially right out of the oven. 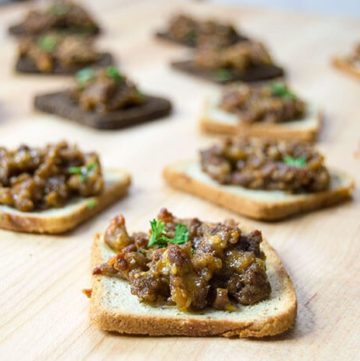 Keyword bread, cheese, chorizo, rye, sausage
Tried this recipe?Let us know how it was!