It’s Harry Potter week here in the Starving Chef’s kitchen. Today we are joining Harry and Hermione at the lustrious “Slug Club” with Professor Slughorn, where talented witches and wizards alike are invited for a private dinner in Professor Slughorn’s office.

During their evening at the Slug Club, Hermione continously tries to dodge Cormac McClaggen who has been trying to flirt with her.

And while initially Hermione was using McClaggen to make Ron jealous, she quickly realized that McClaggen was overly persistent for her liking anyway. So at the party, she gobbles down dragon tartare because it suppposedly gives the diner horrid breath.

While in the books Harry refers to the dish as “Dragon Balls” – as with most tartare, it is served raw. However, in the Muggle version, dragon meat is really hard to come by, so London broil flank steak will have to do.

This dragon “tartare” is broiled under high heat until cooked medium rare in the center and then finished off with a real blast of fire.

It is then topped with a chanterelle and black garlic mash – for optimal bad breath. 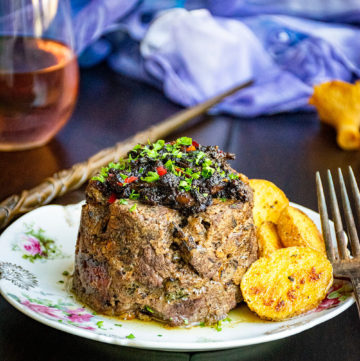 Keyword black garlic, Harry Potter, horseradish, mushrooms, steak
Tried this recipe?Let us know how it was!