“Dobby has no master. Dobby is a free elf, and Dobby has come to save Harry Potter and his friends!”

Tonight we apparate back to England to stay at Twelve Grimmauld place – previous home to Sirius Black’s family and headquarters for the Order of the Phoenix. If you aren’t caught up on the Harry Potter series (and let’s be honest, it’s been twenty years, so you should be), there may be mild spoilers in this post!

Out of all the House Elves we meet in the wizarding world, Kreacher is possibly the most miserable of them. Winky might come in as a close second, even though she was drunk on butterbeer most of the time. Even Dobby, who lived with the Malfoys, remained positive despite his role.

However Kreacher does eventually show his soft side, mostly to Harry, by cooking him simple but heartwarming dishes. One of those times happens to be right after Harry has accidentally slipped into Voldemort’s mind. And even though Harry wasn’t hungry enough to eat the stew, he still appreciated Kreacher’s efforts.

Kreacher, out of all the House Elves, probably made the best soups and stews – one of his favorites being French onion soup, which he made for Harry after Harry gifted him Regulus’ locket. I’d like to think that once the wizarding war ended, Hermione restarted S.P.E.W. and mended soured relationships between house elves and wizards, with Kreacher at her side as a helpful ambassador. 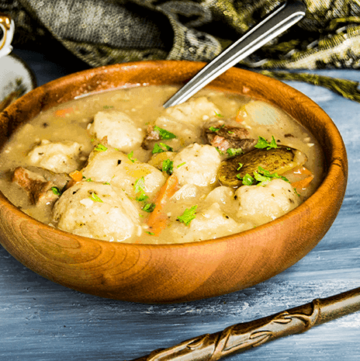 Keyword beef, dumplings, soup
Tried this recipe?Let us know how it was!