“No one will take my dragons.”

Dragon eggs are rumored to be able to maintain a spark of life within them for decades and have deep connections to powerful magic. If you aren’t caught up on the most recent season of Game of Thrones, be warned, there may be mild spoilers in this post!

Dragons return to the world in one of the early seasons of Game of Thrones after Daenerys attempts blood magic to revive her dying husband. When it doesn’t work, she burns the witch at the stake for not only essentially killing the Khal, but her unborn baby as well. It is this combination of human sacrifice and blood magic that makes the eggs hatch and thus, Daenerys Stormborn becomes the Unburnt, Mother of Dragons.

My eggs, however, have nothing to do with fire. In fact, they have everything to do with ice instead. With no blood magic at my disposal, I had to create the dragon eggs myself like a peasant.

As long as they are kept frozen, the dragons within them have no chance of hatching. And if you slice one in half, you are conveniently left with a bowl that can also be eaten.

“When my dragons are grown, we will take back what was stolen from me and destroy those who wronged me! We will lay waste to armies and burn cities to the ground!” 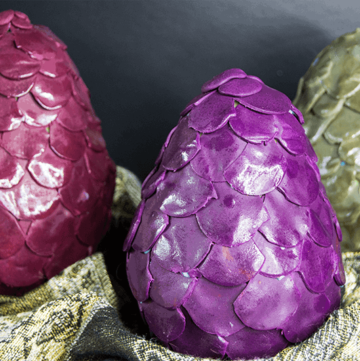 The Starving Chef
Covered in a layer of sugary scales, these dragon eggs are filled with delicacies like ice cream, which surely no one in the Seven Kingdoms has ever tasted.
Print Recipe Pin Recipe
Prep Time 2 hrs
Freezing Time 8 hrs
Total Time 10 hrs
Course Fictional Feasts
Cuisine Game of Thrones
Servings 6

Keyword Game of Thrones, ice cream
Tried this recipe?Let us know how it was!