Packed with cheesy spinach and wrapped in a flaky puff pastry – these puffs may not turn you into a llama but they will certainly help you find your groove.

One of my favorite childhood movies, The Emperor’s New Groove (2000) was an instant hit with me and my other ten-year-old friends and quotes from it remain in my vernacular even two decades later.

While at the time it didn’t recieve much critical acclaim at the time, it went on to be a cult classic for animated-movie Disney nerds and comedy-buffs alike.

One of the most iconic scenes in the movie happens when Kronk and Yzma attempt to poison Kuzco – however unsuccessfully. Kronk is interrupted from the poisoning process when his spinach puffs start burning, causing him to run off and then forget which drink he had already poisoned.

Yzma : So, is everything ready for tonight?

Kronk : Oh, yeah. I thought we’d start off with soup and a light salad, and then see how we feel after that.

Yzma : Not the dinner. You know…

Kronk : Got you covered.

Yzma : Excellent. A few drops in his drink, and then I’ll propose a toast, and he will be dead before dessert.

Kronk : Which is a real shame, because it’s gonna be delicious.

You only need a few simple ingredients to make these delicious spinach puffs.

After the puffs are assembled, bake them until they are golden brown and puffed up. If some of the filling slips out, use the back of a spoon to gently press the filling back in to the pastry shell while they are still hot.

The puffs can be served (a la ‘Kronk-style’), room temp or even chilled! 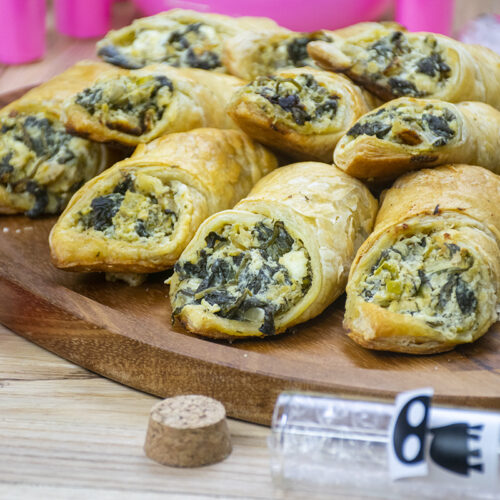 If any of the filling is spilling out, use the back of a spoon to lightly press the filling back into the center of the puffs while they are still hot.
Keyword cheese, puff pastry, ricotta, spinach
Tried this recipe?Let us know how it was!