Remus Lupin is undoubtedly one of my favorite characters from the Harry Potter universe. Upon his intial introduction to Harry and the gang on the Hogwarts Express, he offers Harry a chocolate frog after Harry fainted from the dementors on the train.

The Prizoner of Azkaban gave us the first look at many of my favorite characters from Sirius Black to Buckbeak the hippogriff – the latter of whom I got to meet in-person – er, in-beast? – during my tour of the Harry Potter Studios in London.

He DID bow to me – and honestly it was one of the best moments of my life. https://giphy.com/embed/11P6dElPROzAbu

But in the end, Remus Lupin will always have my magical heart. Lupin’s chocolate frogs are nothing short of magical themselves – whether or not it’s the chocolate that has the magical properties or perhaps he bewitched them himself to calm Harry after their scary dementor encounter. https://giphy.com/embed/RGSg99PXWzKN2

My Muggle-version of chocolate frogs may not be charmed, but they’ll certainly wake up your tastebuds.

Folded into the chocolate frogs are tiny burst of sour fizz – also known as Pop Rocks to us Muggles.

I managed to grab a REAL chocolate frog while in Hogsmeade at Universal Studios Orlando a few years ago, well before my blog officially got off the ground, but I kept the card after all these years – who did I get? Well, Godric Gryffindor of course! 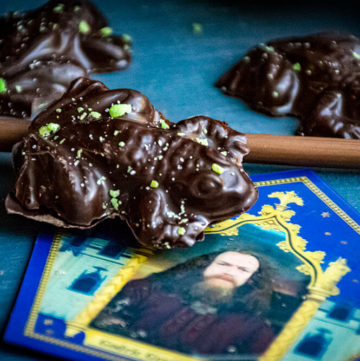 Keyword chocolate, Harry Potter
Tried this recipe?Let us know how it was!