Folks, I think I’ve found the winning combo. Sure, that strawberry avocado mix was good – but there’s just something about maple ice cream with chunks of crispy bacon laced throughout that makes my tastebuds stand on point.

All you need is a can of sweetened condensed milk and two cups of heavy whipping cream.

Use a stand or electric mixer to whip the cream until light and fluffy.

Then combine the sweetened condensed milk with the heavy whipping cream, and blend for a few minutes until smooth and creamy.

I fried up a couple slices of bacon nice and crispy-like, and let them cool completely before crumbling. I used a few tablespoons of brown sugar too, which definitely helped emphasize (and even out) the saltiness of the bacon.

Fold the ingredients into the ice cream base – I tried to leave some of the maple syrup intact, so there are ribbons of it throughout the ice cream.

Will definitely be eating this one ALL TO MYSELF.

Check out my other ice cream creations here 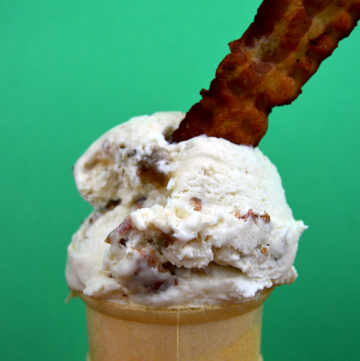 Keyword bacon, brown sugar, ice cream, maple
Tried this recipe?Let us know how it was!