During the last clam bake season, I became aware of a delicious way to prepare clams. Also know as “stuffies” these clams are filled with a savory clam and chorizo filling and topped with a crunchy Old Bay breading.

Plus they are totally portable, which makes them an ideal appetizer for any kind of gathering; from a swanky party to a tailgate.

The clams first have to be cooked and shucked. You’ll be using the cleaned halves of shell to serve the filling, so I always give the shells an extra good scrubbing before tossing them into a pot of boiling water to cook. It’s also important to keep a few tablespoons of the water that the clams cooked in, otherwise referred to in this recipe as “clam juice.”

Once the clams have been removed from their shelled, they’ll get pulsed up in a food processor along with some cooked spicy chorizo. You want a nice thick filling that still has a bit of texture, so take care not to over process.

From there, I sauteed up some onions and red and green peppers. Once the veggies were nice and soft, the chorizo and clam mixture can be added to the skillet along with some corn, minced garlic and a dash of Old Bay seasoning.

Bread crumbs can be used to bind the filling together, as necessary. To fill each half shell, I scooped a heaping tablespoon of the mixture and pressed it in gently to secure it to the shell.

The crunchy topping is made from breadcrumbs mixed with butter and Old Bay seasoning and can be generously sprinkles across the tops of all the stuffed clams.

My boyfriend said he would have liked a “crust free” option, so next time, I’ll definitely leave a few bare tops.

The stuffies only need baked long enough to achieve a crispy golden breading on top – and if you make them a day ahead of time, only long enough to reheat all the way through.

Stuffies are popular in New England and after making this recipe, I’m dead set to get out there and try the real deal for myself!

Stuffed quahogs, or large stuffed clams, are savory with a hint of sweet and are the perfect addition to any party. One bite that delivers a burst of flavor! 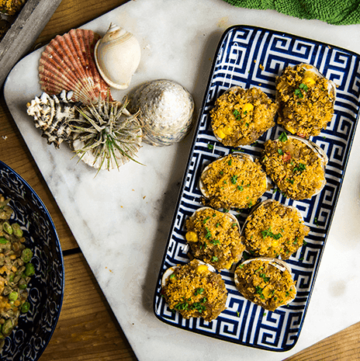 Keyword chorizo, clams, panko
Tried this recipe?Let us know how it was!