Across the nation, from Massachusetts, where the idea of the greatest university was first conceived at the most appropriate of places, a bar, to California, where Bobcats celebrate football season, likely in a bar, and every state in-between, even around the globe, Bobcats never hesitate to show off their green and white pride.

With clambake and lobster fest season upon us, it is only fitting that I get in on the action. All the way in Massachusetts, the Ohio University Alumni Association’s Massachusetts Chapter is keeping the traditions of the chapter alive by celebrating with a lobster fest of their own, the first annual Cutler’s Lobster Fest, named after a founder of Ohio University. In honor of this celebration, I saw it as only fitting to create a green and white recipe that any Bobcat (or non-Bobcat) could create alongside their very own lobster bake at home.

I picked up some fresh broccoli and cauliflower from a local grocery market to mimic Ohio University’s green and white school colors. You can choose whatever kinds of toppings you’d like on your salad, but the dressing – made with vinegar and thick Greek yogurt, is the true key to this delicious recipe.

One of the most important steps to cooking broccoli perfectly is having an ice bath ready to dunk the broccoli into immediately after removing it from the boiling water to instantly stop the cooking process. I made sure to prepare mine first so the water temperature is nice and cold when the broccoli and cauliflower is ready to transfer over.

Boil the cauliflower first, so it doesn’t risk getting stained green by the broccoli while it cooks. After letting it boil for 5-10 minutes, transfer it to the ice bath as you bring the water back to a rolling boil. It should be just soft enough to poke a fork into with little pressure.

Add the broccoli to the water and keep a close eye on it. When the water begins to boil again, the broccoli will have turned a brighter green, and should be fork tender, after 2-4 minutes. Quickly transfer it to the ice bath to halt the cooking process from making the broccoli mushy!

Drain the broccoli and cauliflower from the ice bath and chill as you prepare the dressing.

To make the dressing, combine the Greek yogurt, vinegar, and half of the bacon, sunflower seeds, sliced shallots, and raisins. Save the other half for sprinkling on top when it comes time to bust out the salad at the lobster bake.

Gently toss the broccoli salad in the dressing with the drained white corn in a large bowl until the broccoli and cauliflower is completely covered.

Top the salad with the fried onions and remaining raisins, sunflower seeds, and bacon.

The flavors of this salad are delicate enough to compliment the taste of savory lobster perfectly – and not only is it a perfect companion to seafood, it can be a healthy alternative to greasy tailgating food, too! Go Bobcats!!

RECIPE UPDATE: This recipe can now be found in dining halls on campus – so be sure to get a taste if you can! 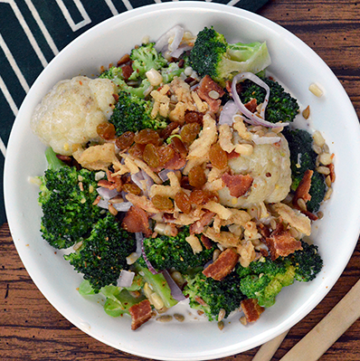 The Starving Chef
You can choose whatever kinds of toppings you’d like on your salad, but the dressing – made with vinegar and thick Greek yogurt, is the true key to this recipe.
Print Recipe Pin Recipe
Prep Time 15 mins
Cook Time 10 mins
Chill Time 1 hr
Total Time 1 hr 25 mins
Course Side Dish
Cuisine American, Quick & Easy
Servings 6

Keyword bacon, broccoli, cauliflower
Tried this recipe?Let us know how it was!