Only one more day until the series premiere of the FINAL season of Game of Thrones – and what better way to celebrate the end of an era than with some of the most authentic food from Game of Thrones yet: kidney pie.

If you aren’t caught up on the MOST RECENT SEASON of Game of Thrones – BE WARNED! There’s gonna be BIG OL’ SPOILERS IN THIS POST! Don’t say I didn’t warn you!

In season six of Game of Thrones, Jon and Sansa finally reunite at Winterfell after being separated and both being put through their own trials and tribulations over the course of 5 seasons. While they reconnect, they briefly reminsence on Old Nan’s kidney pies; “The one with the peas and the onions,” Jon remarks.

Old Nan was a slightly scary woman who took care of the Stark childern; specifically we see her tending to Bran after he was pushed from the window my Jaime Lannister. While Bran rests, she regales some terrifying tales of the White Walkers beyond the Wall – an account that I think was much more than a story told to scare little boys.

And it’s specifically because of Old Nan that I will be SEVERELY disappointed if giant pale spiders don’t make an appearance some time during the final battle for the land of the living.

Game of Thrones is infamous for repeating it’s own history, so Old Nan’s story theory may actually hold some weight. I’ve been watching NOTHING but Game of Thrones conspiracy theory videos, but this isn’t even the wildest theory out there:

Because Game of Thrones is notorious for telling us exactly what will happen without giving away they are telling us what is going to happen; I think that Old Nan knew about the Night King and knew all the old stories were in fact, true.

If I were Old Nan and knew there was nothing I could do to stop the long night from coming, I would probably just distract myself by learning how to cook (what else could a woman do back in those days?).

Old Nan’s kidney pie is stuffed with peas and onions in addition to steak and lamb kidney. Tucked into a homemade hot water crust, Old Nan’s pie was likely the envy of the other cooks in Winterfell.

Another character we know fancies kidney pie is the king of pies himself: Hot Pie!

He regales the importance of lard in the crust and the need for a perfect gravy for every kidney pie when Brienne and Podrick stop at the Inn at the Crossroads for a quick bite to eat.

Regardless of who is sitting on the Iron Throne at the end of the series, if one thing is for certain – as long as the Night King doesn’t win, that is – kidney pies like this one will still be prevailent across Westeros once the dust settles from all the battling, of course.

PRO TIP: These kidney pies are an authentic take on real Medieval recipes – you may need to go to a butcher shop to specifically find kidney meat. I used lamb kidney in my recipe but beef kidney will work too. During my personal quest to find kidney it seemed that liver was a much more readily available meat in my region; while it may have a slightly different taste, liver can be substituted in this recipe for the kidney. And if you aren’t partial to organ meats in general, you can leave the kidney out and double up the steak or add a different meat like chicken. 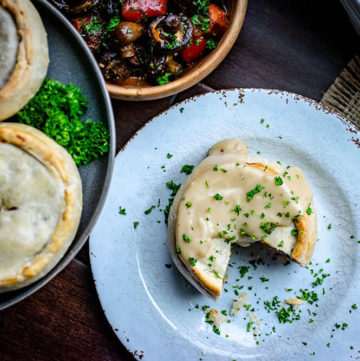 Keyword Game of Thrones, kidney, lamb, pie
Tried this recipe?Let us know how it was!