If you’re anything like me, you are eagerly awaiting the premiere of the Opening Ceremony for the Winter Olympics! Every four years (or every two between winter and summer olympics, depending when you are reading this), I love to track where the Olympic torch will be as it journeys from Greece to light the flame that officially launches the Olympic games. This year, the Olympic torch made a delicious pass through my kitchen – in the form of ice cream flambé.

There are two ways this dish can be served – one is “kid friendly” that involves no pyrotechnics. The second way, as seen in my video, involves blow torches and alcohol lit on fire. And while this post will outline the best way to make this flaming ice cream, I encourage anyone who attempts this recipe to use EXTREME CAUTION because you are literally playing with fire.

For my ice cream cones, I created a simple paper label to really drive home the Olympic Torch aesthetic. You can print your own version of my Olympic labels below!

WARNING: IF YOU USE THE PAPER LABELS BE SURE TO REMOVE THEM PRIOR TO LIGHTING THE ICE CREAM ON FIRE! THE PAPER WILL IGNITE!

The tops of the ice cream cones are adorned with meringue – which adds a lovely toasted marshmallow flavor. Ultimately it doesn’t matter if you don’t torch your meringue, but for appearances, it certainly does help!

I attempted the lighting of my torch several times before I got it just right. Between dipping the top in alcohol to light it (doesn’t work – alcohol gets to cold), to adding alcohol in the meringue (similar issue being too cold to ignite) and then almost burning down my blog studio when I made my first attempt at pouring the flaming liquid onto a cone with the paper label intact resulting in a fire ball that spread from the ice cream to the gold prop paper… but when I finally got it just right, this was my actual reaction:

And that’s why I’m here to figure these recipes out for you! And like I said before – it’s fine if you don’t want to play with fire this Olympic season, these ice cream ‘torches’ are just as cute and yummy without all the flames. 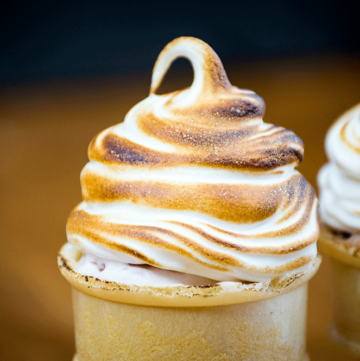 Keyword ice cream
Tried this recipe?Let us know how it was!