What’s better than hunkering down on a cold night with a big bowl of creamy, hardy, delicious chowder? Especially one packed with potatoes, onions, bacon, and clams??

This week’s challenge was to recreate a famous dish. I’m not sure about you guys, but I can’t think of “New England Clam Chowder” without thinking about this scene:

That’s why it’s famous to me, anyways.

The key to a perfect New England clam chowder is, surprisingly, canned clams. For the home chef, the canned clams ensure every spoonful is packed with meaty flavor. I love me a chunky soup, so I filled mine with hunks of potatoes, bacon, celery and onions too.

I always start my soups by searing the longest cooking vegetables in the bottom of the pot until they have just started to brown. First, cook the bacon until crispy, then add the the potatoes to the leftover grease and cook for about ten minutes, followed by the onions and celery.

When the potatoes have started to turn translucent around the edges, pour in the chicken stock and simmer for several minutes. Then sprinkle on the flour and stir until the flour has been completely incorporated and the broth has thickened.

Add the remaining chicken broth and a cup of water, toss in the bay leaves, and simmer for about ten minutes or until the potatoes are super tender.

During the last ten minutes of simmering, pour in the remaining chicken broth and remove all the bay leaves. For a smoother chowder, an optional step would be to blend all but one cup of the soup in a food processor until creamy. I skipped that step, but it definitely adds a whole new level of flavor combination!

The last three minutes, add the drained clams and stir into the chowder. It’s important to add the clams last, since they will cook the quickest. Cook too long, and the clams will turn rubbery.

Immediately after adding the clams, stir in the heavy cream so the chowder is no longer simmering. Remove from the heat.

Sprinkle the crispy bacon and chives over the top of the chowder and serve right away!

I served my chowder alongside some no-knead drop biscuits that were ready in about fifteen minutes. They were perfect for sopping up the leftover soup when I scraped my bowl clean. 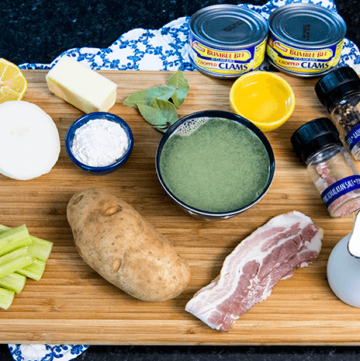 Keyword chowder, clams, seafood, soup
Tried this recipe?Let us know how it was!