It’s Pączki Day! If you live in the Midwest (or in a major city with a large Polish population) you may be familiar with the ‘holiday’ symonymous with Fat Tuesday. Pączki are massive, cream or jelly-filled pastries that put other donuts to shame.

If you don’t live in Cleveland like I do – where lines to get fresh pączki wrap around buildings – you can certainly make the Polish treat at home.

Traditionally, pączki were made prior to the Lenten fast in order to use up all of the sugar, butter, and lard and served on Fat Tuesday. While my recipe for pączki may be a little less-than-traditional, if you can’t get your hands on the real deal, these pączki-donuts are close enough!

To start, add yeast to warm milk with a pinch of sugar and let the yeast bloom until it is frothy on top. Pour the milk mixture into a large bowl along with the flour – add the flour slowly, a half cup or so at a time, until a thick, sticky batter forms. Cover the dough and let it rise for about thirty minutes.

While the dough rises, in the bowl of a stand mixer, whisk together the egg yolks and egg whites along with the sugar, vanilla and salt until it is pale and frothy.

Add the risen dough to the bowl of the mixer and replace the whisk attachment with the dough hook.

Continue adding the remaining flour, again about a half cup at a time, to the bowl of the stand mixer. Stir on a medium low speed until a thick dough forms. It should cling to the hook but not to the sides of the bowl.

Knead the dough on a floured surface for a few minutes to get it nice and elastic, then put it back into the bowl and once again, cover and let rise until it is doubled in size.

Punch down the dough and roll it out on a large, floured surface. Use a glass or small bowl to cut out even shaped circles from the dough.

You can use the leftover dough by mashing it all together and rolling it out again.

Cover the cut dough and let rise for at least an hour.

I fried my pączki but you can also bake them! Instead of using hot oil, preheat the oven to 350 F and bake for 25-30 minutes, or until they are golden brown and cooked through. Traditional pączki are fried, but the baking method will produce similar results.

Once the pączki are fried and golden brown – they should be nice and puffy. Mine got a touch dark as it was my first time ever frying pączki, but they tasted pretty spot on.

I filled mine with an assortment of flavoring. Traditional pączki are filled with lemon custard, cream or various jellies. Modern versions can be much more wild and can contain chocolate ganache or pina colada fillings! I kept it simple and filled mine with homemade custard, strawberry jam and grape jelly (because that’s all I had on hand!). Give the pączki a generous covering of powdered sugar – make a simple sugar glaze instead! However you serve them, there’s no better way to celebrate Pączki Day than with fresh, homemade pączki! 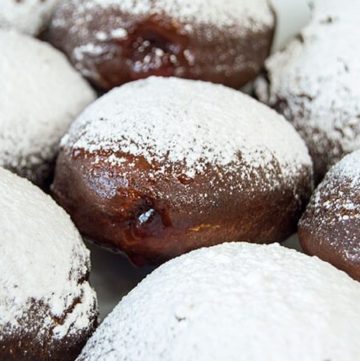 Keyword dessert, donut
Tried this recipe?Let us know how it was!