Pigeon Pie is a staple of many of the kingdoms mentioned in Game of Thrones. It was even served at King Joffery’s wedding (complete with live pigeons).

Sansa is offered the pie by Shae and Braun and his betrothed plan on serving it at their own countryside wedding – but the true heart of Pigeon Pie lies with the people of the Capital.

Eaten by peasants and kings alike, maybe this pie is all that is needed to unite the seven kingdoms. Quick, someone tell Dany before she burns everything to the ground!

The pie itself is made with common ingredients found throughout Westeros, so it’s not surprising that pigeon pie is a staple across many of the different cultures found in the seven kingdoms. I didn’t use real pigeons in my pie, but I did use cornish hen, which is the smaller, gamey-er tasting cousin to the common chicken. The meat of the cornish hen is so tender it practically melts in your mouth. However, if you can find your own pigeon meat (which unfortunately is not available to me in my non-fiction world), use that for an authentic pigeon pie.

Start by making the pie crust. I made mine from scratch to keep a traditional taste, plus I wanted to make the crust slightly thicker than what can be found in store-bought varieties. I used a food processor to combine the butter and flour into a crumbly dough, then used just enough water to form a smooth dough. Regardless of the kind of dough you use, make sure it’s very cold when it’s time to roll it out. I made a double batch so I could make the crown, rose, and feather decorations, but if you’re going for a ‘Westeros-peasant vibe’ leave the decor off.

Next, if using whole cooked cornish hens, be sure to remove the meat from the bones and shred it. I used my recipe from the Hound’s Roasted Chicken (recipe coming soon!) but a rotisserie chicken works just as well, especially if you don’t have the time to roast a cornish hen prior to making the pie.

Sauté the vegetables, starting with the potatoes, carrots and onions until they have started to soften, then add the lighter vegetables like squash. Pour in the chicken broth and let the filling simmer until most of the liquid has evaporated.

Add the cornish hen meat to the skillet and stir it into the vegetables.

To thicken the filling, sprinkle flour over the top and stir it into the filling until it has reached the desired thickness. Unlike a chicken pot pie, this filling should not be runny.

If using broccoli, hold off from adding that until the very last step before sealing up the pie., otherwise the broccoli will become mushy.

Let the pie filling cool for about fifteen minutes while you roll out the pie crust. I left mine slightly thicker than a traditional crust to ensure that it wouldn’t collapse when I released it from the springform cake tin. Fill the crusts with the filling to the tops of the pan, then cover with a second piece of pie crust.

If you’re going for a ‘Joffery’s wedding’ vibe, make a second, smaller pie to stack on top of the larger pie once it has cooked. I baked the bases of my pies prior to decorating to make sure the sides of the pie stood on their own before assembling the entire thing.

I took some inspiration from Joffery’s pigeon pie for the design and included some pie crust feathers, roses and a crown.

Piece together the pie then brush with an eggwash and bake until the decorations have turned golden brown.

I just so happened to have some pesto left over from a recent recipe for carrot soup I created by using the entire vegetable from root to stem. I used the pesto to add some color to the pie and some added flavor to the crust.

I’d like to think this pie would have made even the cooks in the castle envious. Serve alongside a large glass of wine, but maybe have someone test the wine for poison before you drink it. 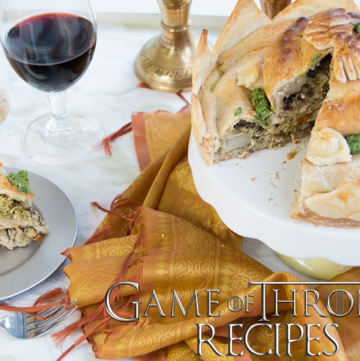 Keyword cornish hen, pie, pie crust
Tried this recipe?Let us know how it was!