When we first moved to our new home, I was constantly seeking out quick, twenty-minutes-or-less recipes that I could whip up between unpacking boxes. I had been seeing a lot of ‘twisted’ recipes around the internet using dough sheets, so I knew I had to give it a shot and made some of my very own ‘twisted’ pizza!

My first attempt, I didn’t realize I had accidentally purchased a can of sheet dough and a can of crescent dough. Both are essentially the exact same thing, except one had perforations where the crescents are meant to be separated. Either dough will work, but it’s definitely easier to work with two sheets of dough, since the lines in the crescent dough make the twists fall apart mid-turn.

Start by spreading a thin, smooth layer of pizza sauce all across the pizza dough. I added the pepperonis in strips where I intended to cut the dough, so each twist was packed with pepperonis!

Add a layer of cheese – be sure not to spread it on to thick, or else you might end up with soggy twists.

Place the second sheet of dough on top of the assembled pizza. Cut the dough into strips. If you are using crescent dough, be sure to pinch together the seams the best you can before twisting the dough. To do this, just grab either end of the dough and turn in opposite directions.

Bake the pizza twists for about fifteen minutes, or until they are golden brown and cooked though.

I served mine with some chipotle ranch for dipping too. Yum! 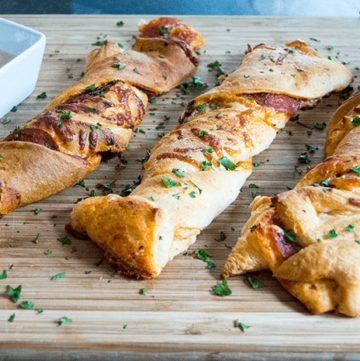 Keyword cheese, marinara, pepperoni, pizza
Tried this recipe?Let us know how it was!