Whether or not you’ve been caught up in the Pokemon craze gripping the world over the last few months, there’s no denying that Pokemon are popping up pretty much every where you look. As an avid player of Pokemon GO, I’ve been dying to do some Pokemon themed treats too!

This week I focused on practicing my fondant skills and made simple sour cream and lemon cupcakes as the base. For the Pokeballs, I combined two thin sheets of red and white fondant – I even made 3D Pokeballs by draping the fondant over a serving bowl and letting it harden for a few days.

The simplest kind of fondant Pokeball is to cut circles into thinly rolled red and white fondant, then cutting each circle in half. Water is both a friend and foe, I found, while the perfect amount of water acts like a super glue, too much or too little with leave you with soggy edges that won’t dry properly.

My fondant Pikachu was my favorite and I based his design off a simple Youtube tutorial. Squirtle, Charmander and Bulbasaur on the other hand were a little more difficult to perfect…

Each of the fondant Pokemon took about 3-4 hours to make, and honestly I could have spent a lot longer on each of them! Most fondant pieces, such as these, are meant to be hardened and not consumed (though I suppose you could if you were really determined), so I actually ended up keeping mine in a protective display case as a reward for all my effort.

You can make your fondant Pokemon to place on your favorite cupcake, cake, or dessert (or make them just for fun, like I did!). Gotta Catch ’em All!

What’s your favorite Pokemon? What level are you in Pokemon GO? Let me know in the comments! 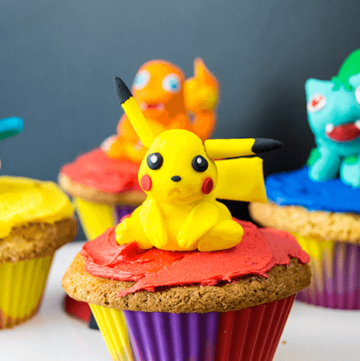 Keyword Pokemon
Tried this recipe?Let us know how it was!