For every season, there’s a reason to rewatch/reread Harry Potter. Halloween is one of the biggest celebrations at Hogwarts, with the Great Hall decked out with giant floating pumpkins and magical bats. Even the ghosts get into the spirit. However, while the rest of the school gets into the spooky mood, mischief is afoot in the first floor girl’s lavatory – where polyjuice potion is being brewed.

In the books, polyjuice potion takes about a month to brew and includes ingredients like lacewig flies, leeches, powdered bicorn horn, and shredded boomslang skin and of course, a piece of the person you want to transform into.

The recipe for Muggles is much simpler: ginger ale, lime sherbet, and pieces of dried fruit like raisins or slimy things like mandarin oranges. The raisins and oranges are optional, though they do add some texture to the polyjuice potion – in the books it is described as “thick and mud-like.”

For a realistic potion, freeze the lime sherbert in a large bottle and right before serving pour in the ginger ale. This will cause the polyjuice potion to froth and bubble, just like the real deal. If you are making polyjuice potion to serve a party, prep a cauldron instead and double the recipe below. It’s just like magic! 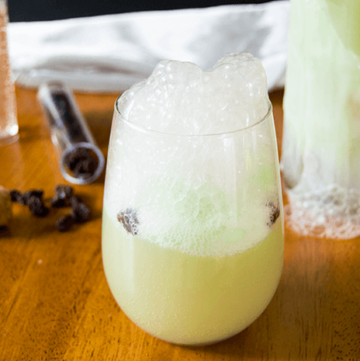 Keyword drinks, Harry Potter
Tried this recipe?Let us know how it was!