Portuguese cuisine has a soft spot for shellfish, apparently. I’ve been looking for an excuse to make some easy clams and with this cultural challenge, I finally found my opportunity.

And even if you don’t speak a lick of Portuguese (like me), at least your taste buds will be saying “estes mariscos são incríveis” after experiencing this dish.

This recipe is especially amazing since it doesn’t require a whole lot – plus where I live right now, clam and mussels are stupid cheap, so even better for my budget.

Start by sauteing the garlic in a pan with the red chili pepper flakes and a touch of oil. Don’t mind the blackened bits in my pan – I might have not been paying close attention to my oil and red pepper flakes as the oil was heating. Oops.

After a few moments of sauteing the garlic, add bread crumbs to the pan followed by the clams.

When the breadcrumbs have browned, just pour in the water and wine then bring to a boil. Cover and let the clams steam for 5-8 minutes or until all of the clams have opened.

Just take a little sneak peak every few minutes, to make sure the clams aren’t overcooking!

Discard any unopened clams – if they don’t open they were likely already dead before cooking and can carry a ton of illnesses. I think I only had two in my batch that didn’t open, so I know the ones I got were fresh!

Portuguese meals are traditionally served with a loaf of Portuguese bread – or the crusty bread of your choice.

When perfectly cooked, the clams should release from their shells when gently forked and will not be chewy. Definitely going to be adding this easy recipe to my arsenal of regularly cooked meals! 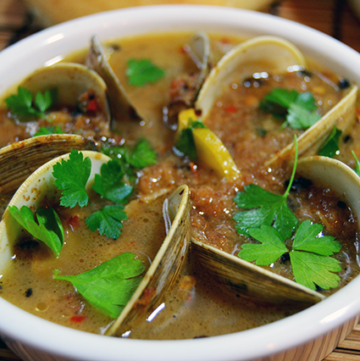 Keyword clams, garlic, seafood, wine
Tried this recipe?Let us know how it was!