Today we are making pumpkin butter apple pie cinnamon rolls with a maple cream cheese frosting. They’re all of the quintessential flavors of fall rolled up into a delicious cinnamon bun.

The ‘secret’ ingredient in this recipe is actually raw pizza dough! Most grocery stores I’ve been to have some sort of fresh, plain pizza dough available in their deli or bakery; and I’ve also used frozen varieties of raw pizza dough when I can’t find the fresh stuff. And of course, if you are in a pinch, you can also make your favorite pizza dough recipe from scratch.

These cinnamon rolls are packed with every fall flavor imaginable. I’m already obsessed with cinnamon rolls but this recipe just takes them to a whole new level 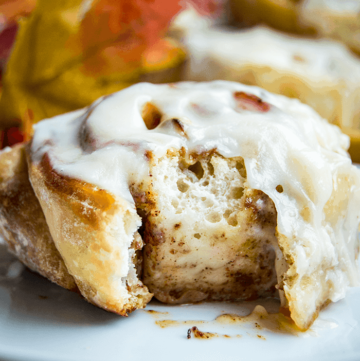 Keyword apples, breakfast, dessert, pumpkin spice
Tried this recipe?Let us know how it was!