It’s officially time to return to the wizarding world, just like I do every year, to celebrate the universe and fandom surrounding the Boy Who Lived.

So all aboard the Hogwarts Express as we hop on the train to Hogwarts to start another school year – and most importantly, head back to the Quidditch pitch.

If you haven’t watched all of the Harry Potter movies, be warned there are spoilers ahead – you’ve had more than enough time to catch up on the franchise, so jump to the recipe if you don’t want to read any potential plot line spoilers!

Today we are back in the magical universe of Harry Potter where we will be recreating recipes inspired by the the book series and movies. I’ve been an avid Harry Potter fan since I was a kid – I am a book loyalist by heart, but the movies play on repeat in my soul.

Not surprisingly, my fandom has seeped over into my kitchen – which I transform into the Hogwarts ktichens every summer during the last week of July. This year, I am focusing on dishes that can be found at Hogwarts – whether they were specifically mentioned in the books or not.

This reimagining of the breakfast served in the Great Hall right before a Quidditch match includes a high-protein quiche to provide a (magical) boost just before the players hop on their broomsticks.

Harry was often too nervous to eat a substantial meal prior to any matches and Hermione frequently had to remind both Harry and Ron to eat before their matches in OoTP.

It’s perhaps likely that a high-protein breakfast is the actual magic that unlocks the bespectacled Harry’s ability to see the tiny golden speck that is the Golden Snitch in the giant Quidditch pitch in the first place.

Thanks to the House Elves in the kitchens, I’d like to think that after the matches, a brunch would also be served for the students too lazy to wake up before the game – and it is equally as likely this quiche would have been served again to rouse the sleepy-eyed students.

Here’s what you’ll need to make a magical quiche.

The MAGIC You’ll Need for a PERFECT Quiche

To make a perfect quiche, there are a few different things to try for the most success. Practice makes perfect, Mr. Potter.

Called “blind baking” – this helps to ensure no soggy bottoms! First bake the crust for a few minutes in the pie pan to set the bottom layer of the crust to make it more liquid resistant. It’s also important to make sure the crust is chilled prior to baking to help prevent shrinkage. Then let the pre-baked crust cool completely before adding any filling.

Professor Sprout would be proud of the vegetables coming out of the garden – especially the magical shrinking spinach plants! Sold in the Muggle world too, saute up a full bag of spinach and it will shrink down to the perfect amount to use in a quiche.

First, it’s important to use fresh spinach as it will hold less moisture than frozen-and-thawed spinach. It’s also important to use enough oil or butter to saute the spinach but not add excess liquid to it. It’s a fine line to follow – but if you’ve ever taken potions with Professor Spape, it will be a breeze.

Once the spinach is sauted down, I transferred it to a fine mesh strainer over a bowl and let the spinach drain for about 15 minutes. I used a paper towel every few minutes to press down on top of the spinach as it drained to help press out more liquid on the bottom while simulatenously soaking liquid into the paper towel. This method works pretty well to get the most liquid out of the spinach as possible.

Make your house smell amazing by chopping up onions, garlic and peppers. It’s important to dice these veggies into small, evenly sized pieces. I used a Muggle tool called an onion chopper to cheat a bit to get a uniform dice. It works perfectly even though it would perplex Arthur Weasley.

I also recommend using a pre-cooked, pre-crumbled breakfast meat like sausage or diced ham. If you are really feeling your inner Hermione and need to make this from scratch, by all means, do that. But this Muggle will absolutely take some questionable non-magical routes to achieve a dish that tastes like it was made with magic! There are usually pre-cooked options available near the bacon and sausage at most grocery stores I go to, so be sure to scope out what options are available near you.

Undoubtedly the House Elves at Hogwarts can simply snap their fingers to prepare a magical feast such as this one. However, for us Muggles the method isn’t quite so simple. Our quiche will need to be baked – and slowly.

The quiche will puff up a tiny bit as it cooks and it will brown easily if not covered. I used a piece of aluminum foil and lightly tented it over my quiche before popping it into the preheated oven. We will need to bake it long enough so that the quiche is set in the middle but not start to dry out.

I started my bake time at 40 minutes at 350°F and it worked like a charm for a perfectly set center and golden brown crust. Then it does need to cool for at least 30 minutes prior to cutting into it.

In fact, it is almost better to make and bake the quiche a day ahead of time and then reheat and serve for the best results – although I know I personally can’t wait that long so I definitely say dig in when you can!

These quiche leftovers are just as good, if not better, than when it is served up fresh.

Once we’re full up on quiche, we’ll stomp on down to the Quidditch pitch where we’ll meet up with fellow students to enjoy the match.

Which Quidditch teams do you route for? And what Harry Potter inspired recipes would you like to see magically brought to life in the future? Let me know in the comments below! 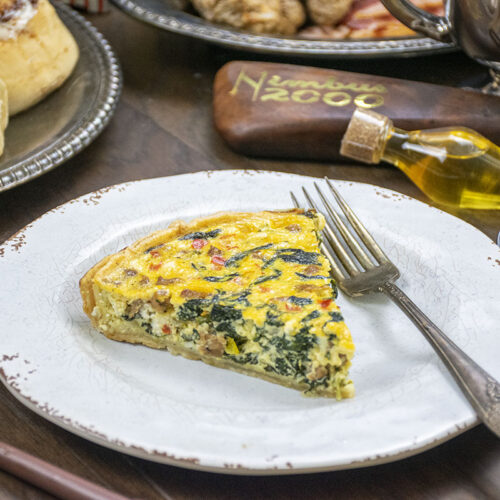 For best results, cook a day ahead and reheat at 350°F for 15-20 minutes.
Keyword breakfast, brunch, eggs, Harry Potter, quiche
Tried this recipe?Let us know how it was!