It’s the Game of Thrones Recipes finale – we’ll be winding down our Westerosi feasts with Qyburns wildfire guacamole.

If you aren’t caught up on the most recent season of Game of Thrones – BE WARNED! There’s gonna be BIG OL’ SPOILERS in this post!

Wildfire is the most explosive chemical in all of Westeros and has been used on more than one occasion – but most recently, Cersei used it to blow up the Sept and put an end to the Tyrells once and for all.

We know that Cersei used Qyburns skills in alchemy to resurrect the Mountain so its not too far fetched to believe that she would have had him reverse engineer the ingredients for wildfire as well.

In his quest to recreate wildfire for the queen, I’d like to think he took some side quests of his own to concoct this spicy wildfire guac.

I’m more than hyped for the season eight premiere tonight – and here’s why I think Qyburn will have an important role to play in the series finale of Game of Thrones:

Using the mortar and pestle breaks down the enzymes in the ingredients causing the oils trapped within to be released in full bodied flavor. Crushing is much more efficient at this than cutting with a blade or using a magic food processor – though I’ve heard good things about blood magic guacamole but have yet to find a good enough horse to sacrifice. Do whichever method makes sense for your alchemy kitchen set up. 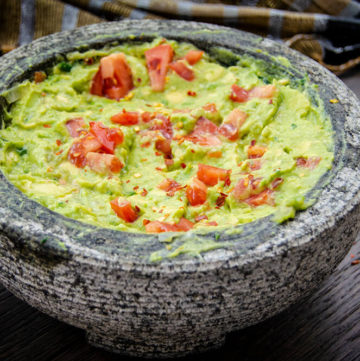 The Starving Chef
In his quest to recreate wildfire for the queen, I’d like to think Qyburn took some side quests of his own to concoct this spicy wildfire guac.
Print Recipe Pin Recipe
Prep Time 10 mins
Mortar & Pestle 20 mins
Total Time 30 mins
Course Fictional Feasts
Cuisine Game of Thrones
Servings 4 cups

Keyword avocado, Game of Thrones, guacamole, spicy
Tried this recipe?Let us know how it was!