Ser Davos has long been one of my favorite characters in Game of Thrones. One of the most wholesome and loyal men in all of Westeros, the Onion Knight finds himself at Castle Black – where rations are meager and the men are ruthless.

If you aren’t caught up on the most recent season of Game of Thrones – BE WARNED!! There’s gonna be BIG OL’ SPOILERS IN THIS POST!

Once a lowly smuggler of – you guessed it – onions to the city of King’s Landing, Ser Davos Seaworth, a man of common folk heritage, finds himself not only as the hand to King Stannis Baratheon, but eventually ends up as the right-hand-man to the Lord Commander of the Night’s Watch and King of the North Jon Snow, after Stannis’ eventual demise.

The Onion Knight’s common folk heritage gives him the unique advantage of being able to see the perspective of those who were not raised as high borns, such as the Starks.

He is not above eating scant rations of whatever is around – he was born and raised eating Bowls of Brown in Flea Bottom after all.

During Robert’s rebellion, Davos smuggled onions and other food supplies to Baratheon forces – enough to sustain Stannis’ men though the end of the war. Onions make for a good source of food because they are easy to transport, come in their own ‘paper skin’ packaging and last a long time.

Onions have a wide range of ways to be cooked as well – from being slow roasted in their skins until they are sweet, sauted in lard or just eaten raw; there’s no doubt that onions were the reason why Stannis’ men didn’t die during the seige.

At Castle Black, onions are easily stored in the cold cellars – meaning they can be saved for last when food supplies dwindle.

It’s obvious that Ser Davos has a larger role to play in the protection (or demise) of Westeros – and here’s to hoping he survives the final season of Game of Thrones.

“If we don’t put aside our enmities and band together, we will die. And then it doesn’t matter whose skeleton sits on the Iron Throne.”―Davos Seaworth on the Great War 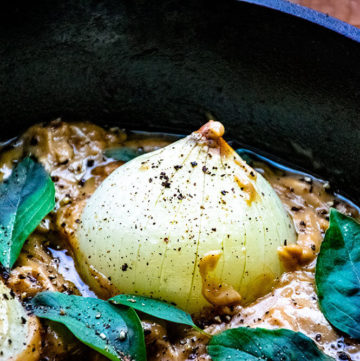 Keyword cast iron, Game of Thrones, gravy, onion
Tried this recipe?Let us know how it was!